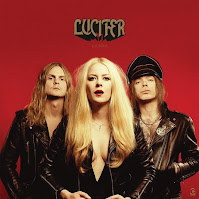 Lucifer II does mark a partial change of direction from the debut, but it does so without neglecting the bands roots and initial premise to catapult the qualifies of 70s hard rock and proto doom metal into contemporary times. Immediately more accessible, rockin' and shufflin' than the doomier gloom of its older sibling, its a memorable and inspirational introduction to what would become the more stable Lucifer line-up. And that would of course involve the legendary Nicke Andersson of Entombed, The Hellacopters, Imperial State Electric and Death Breath fame, a musician that excels in numerous genres and instruments, the now-husband of Johanna, and an addition whose presence is felt in the excellent craftsmanship of these tunes. Add another one-shot member in Robin Tidebrink, and they're off to the races, because while I was IMPRESSED with the first album, as I am with a lot of quality doom and retro metal, it was Lucifer II that really transformed me into the slobbering fan I am today. This one went into regular rotation when I was doing landscaping in the summer of 2018, and it hasn't left.

Lucifer II is a hit generator. Tracks like "California Son", "Before the Sun" and "Reaper On Your Heels" jab you with all the right grooves, a blend of Sabbath, Heart, maybe even a little Cream or Zeppelin in the riffage, but not limited to that, and Johanna's creamy crooning just dripping all over the smooth punch of the guitars. This is where they really started to load in the small atmospherics like pianos, bells, organs (as in "Reaper...") that only serve to enhance the songs without taking them over, and unlike the debut, there are no points where I felt there was an abrupt transition or a tune that needs further polish. This is all so well written and makes perfect sense, from the opening licks, to the escalating bridges where they'll burst into a more controlled freak-out groove. And those who think the doom is no longer strong with them, guess again, because half the tracks here have some notable, darker passage or underpinning groove that lets you know just what direction they've come from, and it ain't heaven. Nick is a phenomenon here, every tone carefully chosen, every bluesy swagger perfectly inserted, every beat so organic and fresh and interesting that you could almost listen to that alone.

There are no tracks here I dislike, but perhaps one or two that I'll skip from time to time (usually "Dancing with Mr. D" and its slide guitars and cooing backup vocals), so this one doesn't reach the ranks of the two after it, but what a goddamn set you could create from all three, and maybe add a couple in from the debut for good measure. When they get down and dirty as on "Faux Pharaoh" it just feels so badass, that contrast between the ditch-digging rhythm guitar and the melody of her voice feels so unique even when compared to similar groups. Not to dump on popular groups like Witch Mountain, Brume, Windhand  or Sabbath Assembly, all of whom put out some good stuff, but Lucifer just tramples it all. There is so much more to this, and it brings together so many influences that were formative also to my own metal history, that I cannot resist. It's like a spell being cast every time they put out an album, and I keep failing my fucking saving throw.