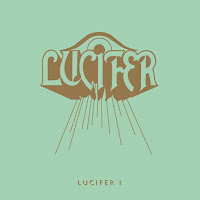 It's nothing novel to hear some new Sabbath sounding upstart arrive on a label like Rise Above Records, but when the simply dubbed Lucifer dropped its debut in 2015, it was obvious to me immediately that this was something special, something slightly different. Granted, this album is the one we would most correlate with traditional doom metal, there are a lot of riffs here that feel as if Tony Iommi is playing along with a new singer, but other 70s hard rock influences like Heart do enter the picture in a few of the songs, foreshadowing the band's future. The band was formed by German vocalist Johanna Sadonis, and then most notably, the debut featured 'Gaz' Jennings, axeman doomlord extraordinaire via Cathedral, and a mix of other British and German musicians, all of whom, with the except of Johanna, lasted for just this one debut album...

And that might explain why this has a slightly different focus than the subsequent releases, but it's a great record all the same. Bright, catchy, and yet unmistakably evil when it wants to be, Lucifer I plays out like a more vintage rock Cathedral, replacing Lee's divisive grumblings with a voice both melodic and angelic. Jennings' guitars are great, whether he's flexing the doom muscles of his alma mater, or some dirtier riff patterns redolent of American groups like Pentagram and The Obsessed, or earlier influences, there's always something catchy to support Johanna's wailing, which is a lot more atmospheric than on the later records. Granted, there are occasions where the riffs go into some abrupt changes, and the material doesn't always feel the most fleshed-out, but for a debut it was already head and shoulders above a lot of the other 'mama' doom that had been coming out around the same time. Dino Gollnick and Andrew Prestridge round out the rhythm section really well, and the sparse synths and ghostly vocal layering and effects add another, ethereal dimension to the drudging darkness.

No tunes I'd consider weak here, but I most often crave the doomy triad of "Abracadabra", "Sabbath" (lol) and "Morning Star". That said, the acoustics in "Grave" are nice, and it has a nice metallic build-up, and it's all quality enough that the full 44 experience is rewarding. I admit that I do spin this one less than the three to follow it, but if you're most in tune with traditional doom metal, and not so much interested in the higher accessibility of the later albums, do not skip out on Lucifer I because it just might prove your favorite. And it's a testament to Lucifer that, no matter which lineup, the band is just so damned good that I can't argue with anyone's love of any of their output. The hours of enjoyment I've gotten listening to them in the last 6-7 years vastly outweigh the praise and thanks I could ever give them.