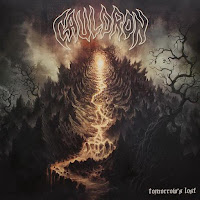 I was a bit underwhelmed by the first few Cauldron records, so when I first saw the excellent Todd Kowalski cover art (do more of these, Todd) for Tomorrow's Lost, I imagined they had turned a new leaf and might be trying out something different. That's not quite the case, but what I can say for this album is that it's a righting of the ship, a better set of tunes with a better production that validates the style the Canadians had been developing through their formative years post-Goat Horn. This isn't exactly a 'great' effort, mind you, it suffers a little from over-familiarity in a few riffs, but it's balanced quite well and shows an added maturity through the band's tenure at Earache Records.

The band is still alternating between driving power metal lite ("End of Time") and their big, bombastic hard rock/heavy metal anthems ("Born to Struggle"), the latter tracing a lot of its DNA to bands like Dokken and Scorpions, and also still a little of the over-pronounced rhythm guitar tone that irked me on Chained to the Nite, if not as bad. I personally find the faster stuff here is just better mixed and more effective. Tracks like "Nitebreaker" and "Burning Forture" really live up to the material on the band's Into the Cauldron EP, which was my clear favorite until the album after this one. Jason Decay's vocals still really work for me, and the drums have a nice rumbling clip to them, as well as the lead guitars, which once again need to be a little more brazen against the rhythm riffs. A couple others I did like are "Endless Ways", which sounds like a tune that'd be better fitting on In Ruin, and "Summoned to Succumb" which rocks along at the perfect clip and has that great Dokken vibe to the chorus; these two also prove the exceptions to the general rule of how I liked the faster material more.

Tomorrow's Lost could have used slightly better production, but for the most part this is one I can sit down and listen through in its entirety without getting annoyed. I do feel that Cauldron was already losing ground at this point to a lot more exciting throwback heavy/speed metal bands, like Enforcer, or their own neighbors Striker and Skull Fist, all a lot more explosive and exciting, but what I can say for these guys is that they were so good at evoking nostalgia for those horror movie closing credits themes, or borderline metal/hard rock anthems of the 80s which thankfully eschewed the glam bullshit. I was finding myself more intrigued with the everyman metal mood that Cauldron creates, something they would refine for what I'd consider their best album four years later, or at least the one I always reach for besides the EP.