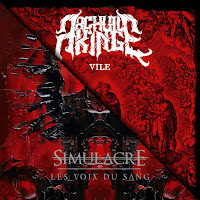 This was a pretty promising split for me, as I was highly impressed with the Archvile King full-length debut À la ruine from earlier this year, but had not heard their original 2020 EP Vile, which is included here in its entirety. Much like that album, their style is a sinister melodic black metal which does have its tendencies towards some black/thrashing elements, although those would be in the minority. The four tracks on this one are pretty good, especially in the riff department for "Bastards of the Sea" and the more patient, eerie "The Feast of the Worm King" which is one of the best songs musically I've heard from them. I will say that I didn't like the vocals quite as much here, the deliver just feels a bit too passive or casually in how its laid out over the much superior music, but we all know that has been fixed now with the full-length and its a small complaint for some pretty damn fine tunes, it's not like they don't fit or are bad. Also, there's a cut titled "Gwyneth Paltrow is a Lich", which had me in stitches, but musically at least it fits with the rest around it.

But I'm kind of covering this in reverse, because the band that fronts this split, Simulacre from Bourdeaux, is also really good, and it is their contributions that I liked a little more due just to the vocal mix. I feel that the styles pair up enough to make the split function, they both play French black metal with a heavy nod to the 90s Scandinavian classics, but where Archvile was in their early stages and having a little more 'fun' with it, Simulacre is more wanton, dreary, perhaps even a dash elegant or Romantic in its delivery, with searing rasps, and wonderfully textured guitars both distorted and acoustic. When these guys pop out a tremolo picked riff, its quite evil, as in "Les Voix du Sang", but also has a richness and warmth to it which was unexpected and really stands out. The drums and bass have a busy vibe to them, almost as if there's a subtle influence from anything from Latin to prog rock, and there's an interesting tendency not to try and flood the listener with walls of chords, but more delicate and intricate melodies, leads, and giving it all a little more of an organic space to breathe...fans of Seth's newest album, or maybe the more Medieval styles of Aorhlac and Vehemence should dig it.

Remarkable, another great pickup for this label and a band I'm looking forward to hearing more from, since they've yet to unleash a full-length themselves. As for Archvile King, the material here is solid as a set-up for the much superior À la ruine, and certainly enhances the split's value, but if you are new to them then I'd head STRAIGHT for that album, because it's really good and I haven't heard nearly enough people talking about it. Either way, if you love French black metal and want to dive more into this newer crop of bands who are sprouting forth while the debatable 'Big Three' are still going strong, here are two example of bands with something worth paying attention to.