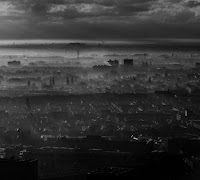 I had the opportunity last year to cover this Dutch band's sophomore outing II: A Material God, and now the band's label Les Acteurs de l'Ombre Productions has done a solid with not only a reissue of their scarce debut, but also pairing it up with an additional live disc. As I had mentioned on this record's follow-up, Wesenwille approaches its black metal with a visual concept that simple reeks of bleak, urban despair and decay, one that you might think lends itself to a more industrialized or electronic instrumentation, perhaps some droning which would visually match the presentation, instead performed with a more traditionally organic approach to its genre which is complemented only by a degree of jangling, dissonant post-metal or post-hardcore augmentation.

I'll be blunt: this debut is even better than its own successor, a flurry of rapid riffing and drumming, tortured vocals that don't depend too strictly on monotonous rasping, and a great use of guitars as tools of atmosphere and not just riffing...there are spacey guitar segues with samples used as narrative, shining and beautiful guitars that would absolutely satisfy those looking for a more -gaze vibe within their black metal, and then these slews of almost hyperactive, punchy thrash riffing ("Prosopopoeia") that they'll unleash before putting the pedal to the metal for the album's peak hostility, its blasting segments dowsed with spiteful, dissonant chord series. All five of the tracks are threatening, haunting, and sometimes beautiful and I can hear easily why this album deserved to be put out there into more hands along with the second.

The Roadburn festival set takes three of the debut tracks, and two from II: A Material God, and blends them seamlessly into a devastating set, which if I'm being honest, sounds just as good if not better than the studio interpretations. There's a vividness or brightness here, especially to the vocals and guitars, which is a little different than the dimmer album versions, and yet it's all performed with razor perfection, and in fact some of the vocals, like the angsty barks in "The Churning Masses", sound even more impressive. I don't know if people in the audience there had a lot of experience with these guys in advance, but they hopefully came away with the desire to track down their stuff. This sounds so great...the bass, the details to the atmospheric guitars, even the sample stuff. Two albums might be a brief amount of time before you slam out your first live album, but in this case it's exceptionally captured, and adds nothing but value to the experience of the debut. If you like bleak, expressive black metal and haven't yet heard Wesenwille, effective without being needlessly complex, conventional only to a point where the modernism sneaks in through the cracks, this is well worth tracking down.