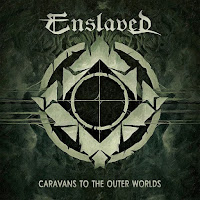 It wasn't enough that Enslaved regaled us with a number of great streaming performances and a killer new studio album, they had yet more material waiting in the wings during the pandemic and that has manifest on the short but sweet Caravans to the Outer Worlds EP. This is comprised of 18 minutes and four tracks, two of which are instrumental, but that's never a band thing in the hands of these capable Norsemen, and the two longer vocal tracks will more than compensate for any misgivings that might create. I do feel that the title track is really the centerpiece, a vicious and incendiary cut with some rapid riffing that is just covered in ambient atmosphere, drawn-out roars that drift into the difference, and an awesome contrast between some vocal harmonies, calm acoustics and heavy surges. This more or less fits the Utgard aesthetic, so like that album it can create nostalgia in turn for their mid-90s and 21st century material, but overall it feels like some of their most modern and ethereal music to date.

The instrumentals are quite cool, with some low-end, creeping organs and eerie chugs leading into a massive, crushing wall of slower doom/black metal for "Intermezzo I", and  "Intermezzo II" seeming like some prog doom that erupts into a melodic death metal riff. I do think both cases would have been stronger as full-blown compositions with vocals, though, the riffs and atmosphere in these almost seem too good to waste on their current formats. Probably the most bizarre piece here is "Ruun II - The Epitaph", an acoustic 'sequel' song that has these lush walls of acoustic guitars, brooding chants, and then squishy sounding little bass or guitar sounds that add an unusual sense of tribal percussion to the proceedings. But it's the clean vocal that arrives right after the 4 minute mark that brings it all home, just great stuff. Caravans to the Outer Worlds would have been more impressive with the two instrumentals extended into proper tunes, for a total of maybe 30 minutes, but as it stands, its still strong writing from one of the best bands in the world, which shows no sign of endings its aural cross-genre adventures any time soon.