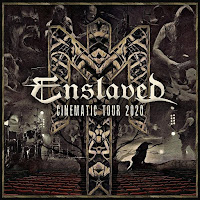 One complaint I can launch against the Cinematic Tour 2020 product is that it might be parceled out in separate audio and DVD release here rather than just the one that I've seen out there that includes EVERYTHING. Granted, the price isn't terribly off to buy them individually, and they're not expensive, but still it felt a little lame, some nickel and diming of the fans. That said, this is by far one of the most tremendous things to come from, and probably exclusively the product of the COVID-times, a fantastic band collecting a number of its streaming performances into a quality box set that should thrill fans of the bands various efforts. Even having watched most of these live as they were happening, this was a recording I was eager to get my mitts on. Their 2017 Roadburn Live was pretty damn good, but this goes beyond reasoning...

Four sets of vinyl or discs covering four distinct performances, each with video accompaniment, the audio quality equal about between them. You want to hear them perform Below the Lights in its entirety, one of their very best albums? Here it is, and it sounds quite damn good although some of the lineup is different than on the original recording, that's a caveat throughout the boxed set. But all of the instruments sounds excellent, airy and live and wonderful much like on the studio versions. For someone so new to the band, Iver is owning those drums, and to think he had to learn so much material to mesh in, AND he offers yet another weapon with his smooth, clean vocals. Now, I would say a few of the cleans throughout these can be a little unbalanced in volume, but its a minor issue since the actual sculpt and delivery of them is top notch. So these discs were a true treat, and I also really loved the full performance of Utgard...the album itself hadn't fully sunk in with me, but after watching them pull it off live it enhanced my appreciation and understanding of that material and now I love the thing.

The other two sets here, Chronicles of the Northbound and The Rise of Ymir, are not as focused performances, but rather thematic arrangements of tracks through their history, a mix of new and old, and they might even be BETTER than the single-album sets. Getting to hear "Ethica Odini" and the sprawling "793 (Slaget om Lindisfarne)" in the same set is just ridiculous, and I'll say the old material in some cases sounds even better than it did back in the 90s. There are a few tunes that crossover into multiple sets ("Ethica Odini", "Havenless"), and that in no way hurts their individual placement or performance, but it would have been even more added value if all the songs were exclusive into just one of them. Regardless, the Cinematic Tour 2020 is an awesome, polished product and a good idea to create something positive out of the nightmare of these last few years. If you have to choose between the two, I'd go for the video because it's a little more epic to experience in that contest, but if you don't use DVDs, or just want something for your car or daily jog, the audio definitely holds up on its own.