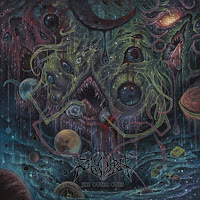 There are times I've got to temper the pride I feel when a cool group of local guys goes on to international metal stardom with a critical ear, and I think I've done so pretty fairly throughout the Revocation catalog; but it's heartwarming to see acquaintances the world over pick up on the Boston band, and several more did with this 2018 effort The Outer Ones, their seventh full-length (not counting their time as Cryptic Warning), and for me the best once since 2009's Existence is Futile. This is the consummate death thrash band, combining the technical instincts of both into a proficient, efficient, punishing excursion into the realms of cosmic horror...always a great topic, although the cover art (their best yet) and lyrics probably highlight it more than the music itself.

You're getting intense, rapid fire riffing sequences that exult the group's worthiness to compete alongside acts really known for that like Obscura or Inferi, mixed with some concrete moshing thrash riffs which help keep them grounded for the pits at their tours and festivals. For me, though, it's the lead work and melodies here that shine, some of the best they've ever constructed, always elevating the songs to a level beyond the mundane, because while the guys can fire off a million riffs a minute, not a lot of them really stand out on their own. It's the flood of technique and incessant aggression that forms them into a patchwork that holds the attention, because you always feel the aural equivalent of 'blink and I might miss something'. But there are some decent rhythm guitars here or there, and I noticed that the more clinical and evil they get ("That Which Consumes All Things"), the better, and the more brick-like and Pantera, the worse off. But the latter doesn't happen enough to really bring down the whole effort, and there's enough variation across all these tunes that it'll soon fade from memory when you encounter the more musical, ambitious stuff.

As for the vocals, I've not always been a huge fan, and they're still a little generic, but there are a few varying degrees of guttural grunts and snarls here to at least mix that up too, and in terms of patterns and delivery they all sound effective over the music below. The main vocal is like a Chuck Schuldiner growl only more blunt, and I still can't imagine how much better they'd be with some more charisma and pain in them. That said, these are adequate enough for a lot of the audience that probably encounters this band among a bunch of lesser deathcore or brutal death acts and obviously aren't so picky. The music is also so polished in the mix that it does feel a bit too mechanical and soulless, a common symptom within this tech death niche. But I don't wanna seem too down on this, because when The Outer Ones shines, it really comes together into some exciting moments that make the heart quicken. It's not perfect, but it's really consistent with their other recent efforts like Great is Our Sin and Deathless, and if you miss bands like Atheist, Hellwitch or Cynic during their heavier phases, here are some successful successors.