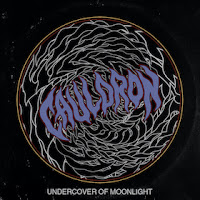 You've seen me use the 'D' word many times in my Cauldron reviews, so it's gratifying that the first track on the Canadians' cover compilation is none other than Dokken's "Paris is Burning", and the cover art itself is a sendup to the Los Angeles legends. Not that I've ever made the comparison out of spite, I really enjoy that Cauldron helps resurrect the vibes I used to feel for bands like that, and Jason Decay's vocals manifest enough of a difference for them to really stand on their own. This is a pretty damn good cover, too, and the production here sounds just right, much like they pulled off with their In Ruin album. It's also, thankfully, one of the most obvious, because the 15 tracks they've selected for this collection show a VAST range of influence, and it's fun to hear how they will tackle each of them...

Speed metal classics like "Take This Torch" from Razor, or "Die Hard" from Venom, are cool in that they let the band go a little dirtier than the heavy metal anthems they usually slap us with, and I think the band actually excels in this territory, with the rawer guitar tones, although they do seem to lose a bit of themselves in trying to emulate the originals. Same with "Necropolis" from Manilla Road, I would have been much more interested in that with Jason's normal vocals, but he's doing a little Mark the Shark impression instead. When they jump into Witchfinder General's "Free Country", it fits wonderfully in the Cauldron style, and the same could be said of "Making Noise and Drinking Beer" from the German Tyrant. The latter is not one I would have expected anybody to remember, and its one of the best and most bang-up covers on this comp. As for the covers of Triumph and Bryan Adams, they kind of suck, largely because the production, which is very uneven across the whole affair because these are mostly snagged individually or in batches from various sessions or recordings. For example, "Lay it on the Line" sounds cheesy and raw and the vocals are too far over the top, where "Run to You" is a super crude live recording and sounds like garbage.

It's funny that they also cover their own alma mater Goat Horn with "Fortress Doomed", a cool song but again the mix flubs it up and doesn't reach its full potential. The cover of Canadian rock and pop hero Gowan's "Moonlight Desires" also took me by surprise, but as much as I like the original, and appreciate that these guys also dig him, there's something slightly off about the production, otherwise this would have been one of the best tracks here. So yeah, an extremely eclectic, interesting and even goofy collection of covers here that would have come across far better with a uniform studio mix, the differences are just too distracting, but not enough so that we can deny the good taste they showed in their choices. Not a lot of generic picks that you'd just expect on a million other metal bands' 'cover albums', the flaws here are all in the presentation.