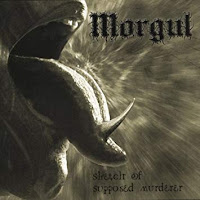 Sketch of Supposed Murder is not nearly the leap that The Horror Grandeur was over the first two Morgul albums, but its certainly an enforcement of the notion that Jack D. Ripper was content with his newfound industrial influence going forward, and if anything this is just a fraction more accessible and varied, but clinging to the horror concepts all the while, with an emphasis on torture, murder and misanthropy. It's also an album that sounds a little dated in its ideas. Many black metal bands had turned towards electronic, Goth and symphonic stylings throughout the late 90s and beyond, and many in the audience found these genre maneuvers unwelcome, so it might be considered a bit of a trend-jumper. There are parts to this album that might sound like a ghastlier Marilyn Manson. Or other parts which sound like Cradle of Filth's snarled vocal channeled through Samael's electronic beats and simplistic chord progressions which serve only to add some beef to the industrial beats.

More accurately, there are parts here, like the track "The Dog and the Master", which sound almost identical to what fellow Norwegians The Kovenant were up to, so mileage is going to vary, and those who want nothing of these musicians beyond their black metal roots should probably stick a fork in Morgul beyond just Lost in Shadows Grey and Parody of the Mass. Despite the obvious cheesy or cringeworthy elements, I still enjoy this one a bit because the production is fantastic. Orchestrated or ambient components are these resonant tapestries against which the heavier frontal rhythms and snarled, goofy vocals balance perfectly, and just when you think some of the guitars might be too dull, or things are getting predictable, Ripper will throw some great new beat at you, or orchestral sweep, or one of the handful great choruses here. It's only rarely pure black metal, except the electrified blast beat in "Dead for a While", but the overall atmosphere throughout will certainly give a shiver or two to fans that don't mind when releases in this medium sound like they belong in a cheap, second-rate haunted house or carousel ride.

Programming is really great, as are the synths, organs, and guest violins. The guitars sound very good in the mix, but again with a lot of industrial metal or Neue Deutsche Härte they are extremely banal and only rarely involve any semblance of creative, instead settling for a percussive effect to keep this vaguely within the 'metal' realm at all. Over this, Ripper splatters all manner of grumbles, growls, goofy narratives, dramatic cleaner ravings ala Vortex or Garm, and some really warped vocal effects that create a psychotic phantasmagoria which lasts through pretty much all the original tunes here; he's also a little experimental in the use of the violins, crowd sounds, etc. The cover of "She" by the mighty KISS, however, is rather ill-advised, and although it's tacked on at the end of the album, it kind of botches up the cohesion of whatever came before it. I remember that dragging it all down for me when I first heard it, and even more so now. Not like it's an awful cover in of itself, but just has so little to do with the rest of the material.

I dig Sketch of Supposed Murder, and it makes a nice combo with The Horror Grandeur around this time of year when the Halloween decoration are up and you can feel all that anticipation brought on by both the holiday and the autumnal season in general, but can fully appreciate that it's not going to satisfy everyone. Think of it like The Sham Mirrors' weird older sibling decked out in mascara, Gothic hosiery, sipping absinthe while he's watching a marathon of noir mystery murders. If that sounds like a party you want to attend, then I think this is also an album you'd like to attend. But stop it after the 8th track.