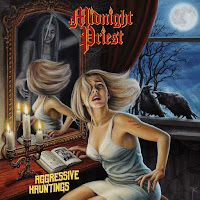 One of a number of bands spun out of a healthy worship of King Diamond and Mercyful Fate, Portugal's Midnight Priest have in some ways slowly began to evolve away from that classification, while in others staying quite comfortable with it. The presence of the King still weighs in heavily in the vocals of 'Lex Thunder', which is as porn star sounding of a handle you're going to give yourself; in particular, his higher pitched range has a bite to it which reminds me a whole lot of KD's falsetto narratives and shrieks from the later 80s efforts like "Them", perhaps with some Henning Basse, Ripper Owens and Halford thrown in there, or at its most intense, Dan Ainlay from Italy's Burning Black. But when he dips into the middle of his range, he has a potent, soaring vocal which actually sounds more unique to me, and frankly I wish he'd use it more...

As for the band's riffing, it's not quite as eloquent or catchy as stuff you'd hear coming from the camp of King and Andy LaRocque, there's a shoddier, crunchier power metal edge to it which is more redolent of Accept, U.D.O., Primal Fear, Running Wild ("Iron Heart") and Judas Priest, sometimes generically so. Which was an issue I had on this album more than any others, that so many of the rhythm guitar parts couldn't live up to or elevate Lex Thunder's vocals, and thus they both sounded a little desperate independently and in unison. Don't get me wrong, if you love every garden variety mid-paced Euro power metal riff you encounter, then there's no reason to think you wouldn't love them here. They also lace in a lot of smoother, speedier licks with a decent sense of melody to the chords which is more representative of their primary influence. But the fact is that there's just not a lot to this one you haven't heard before on the bottom end, and while the musicianship is coherent and would make a bad-ass background for a motorcycle ride or a leather-clad street fight, it doesn't stand out to me in such a crowded feel when other bands can put riffs and choruses together in a way I'll remember a lot more.

The production is brazen and punchy here, with the guitars up front between both their hammering mid-paced chords, little glints of melody and the more-than-competent lead-work which was one of my favorite parts of the record. It's all legit and energetic, and while the lyrics don't form quite a cohesive narrative style like KD, the images and subjects they capture are all perfectly gloomy and metal, not to mention that certain transitions feel a LOT like 80s King Diamond, almost as if they were paraphrased from the original. As I mentioned, though, the shifting vocals and the emphasis on more hard-hitting trad heavy/power metal riffs reminiscent of the German and Danish scenes do keep this band away from being labeled complete clones, and I think they'll improve even further if the singer drops the KD parts and hones in on the stuff he does below that which worked for me a lot more alongside these riffs. Loud, solid but unremarkable stuff here, good enough to get the heads banging but not a lot of my blood flowing. I do remember liking the eponymous debut album a bit more than this one, with the lyrics in Portuguese.