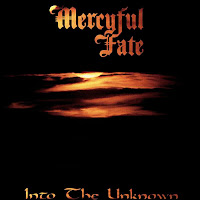 Into the Unknown might be one of the duller looking albums in the Mercyful Fate catalog, but not the worst of them. This marked a point for me when the band's inspiration seemed to be drying up and they were releasing albums to seemingly fill out a contract, or at least that's what a tour through their 1996-1999 material feels like. Nothing they put out was necessarily bad, but a lot of the riffs and ideas felt like mere retreads of others you'd already heard between Fate and the King Diamond albums. And that's really the greatest crime committed on Into the Unknown, which might be one of the more ironically titled albums I've come across, because this one is as straightforward and unsurprising as they get, sort of a mix of Don't Break the Oath, In the Shadows and then Time's production values, updated to their day.

Now you might say that even an average Mercyful Fate record is still probably better than a lot of other metal out there, and I have no argument against that. This is one I can enjoy sitting through because for what it lacks in creative development it compensates for in the energy level. The band is firing up a set of classic MF licks, with enough grooves to sate the fans of their earlier 90s material but a classic feel to the leads and harmonies which kicks me back a decade. The rhythm guitars are some of the simpler patterns they've scribed, with a leaden, chunky tone to them that keeps them hammering above the thick, embedded bass lines which sound pretty fuckin' rad on their own. The leads are modest but worthwhile, and they alternate between a mid-paced gait and the slower grooves from tunes like "Listen to the Bell" which sound like outtakes from In the Shadows (the song even has a line 'deep in the shadows...'). The drums sound good, and the band still knows how to structure a verse-chorus transition quite well, and there are clearly a handful of riffs here like the opener to "Fifteen Men" which I think are pretty damn awesome.

King himself sounds quite good, perhaps not as jazzed up or intense as his performances on the earlier albums in both his mainstays, but he does some cool falsetto counterpoints, and still can deliver some chorus parts that stand out from the rest. The lyrics here deal with cool subjects like Caribbean pirates and other period horror which helps expand out King's lexicon of chills, even if the music might in places feel a little dumbed down or redundant with cuts from In the Shadows and Time. I also got a kick out of the intro, "Lucifer", which is a chanted bastardization of "The Lord's Prayer". Cheesy, indeed, and the most useless track on the album, especially when you consider some of the great intros he's had before, but you just have to get a kick out of King Diamond thinking this was such an edgy idea in 1996. All told though, this is a solid record that I wouldn't necessarily break out unless I was really sick of the first four, except if I wanted to hear one particular tune. Certainly better than its follow-up, but not as timeless or inventive as I'd have hoped.