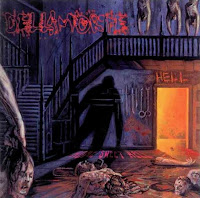 If Dellamorte had shown up during the huge Swedish d-beat death metal revival that struck around the 'oughts, I think they might have made some in-roads as one of the more savage, raw bands to adopt the style. Unfortunately, their tenure in the 90s came at the tail end of when the audience was first starved for the sound, with bands like Dismember going strong, and others like Entombed having already been there, done that, and moved into other pastures (before the inevitable ID crises that would lead them back). So I can see why they were overlooked, but those who really enjoy that sort of late 80s/early 90s aesthetic unraveled by Nihilist will probably find a soft spot for these guys as a sort of pure gorehouse approach to the niche, a lot closer to Dismember than others.

Home Sweet Hell... was their third and final full-length and it hits like a truck with a fat, imposing Sunlight Studio tone slathered in some sustained, raw-throated, angry fucking vocals which give the other vocalists in this one-limited field a run for their money. They're not all that different than how L-G Petrov or Matti Kärki hammered them out, but perhaps a little more snarled and outraged, and you can often hear some backups shouted alongside them which creates a mild variation on what you're used to. The guitar riffs are straight from the book of the first three Entombed records, or Indecent & Obscene, with an often heavy emphasis on the death & roll riffs, mixed in with some simplistic, chunky chugging parts that carry a lot of heft due to the straight to the face production of the record. The drum kit in particular gives it a lot of rock & roll feel, not to mention the implementation of wah wahs, lots of grooves, and chord patterns that are painfully simplistic. Dellamorte truly relies on the sheer volume and potency of what they play to impress the listener, they are about as far from subtle as you can get, and even if there were nuances you might not hear them because of how the album is mixed.

This is an effort that I've always wanted to like more than I do. The vocals are savage, the power is undeniable, but it ends up with a barely passing grade from me simply because there are too few riffs worth a damn here, most just being coughed up from the playbook of pre-existing Swedish death metal bands, or rather, duller versions of those played more intensely. On occasion it really rocks the fuck out, as in "Into the Fire", and if you're a fan of all things blazing and d-beat then I can't imagine tracks like "The Tombs of My Fear" would turn you off. I mean this album pummels the fuck out of you...the tone, the pounding bass-lines which hover just below the rhythm guitars, the grooves and the momentum that they shift between, but I just think the album needed a little more attention to the riffs...if there were another dozen or even half-dozen killer guitar parts on this one I'd get so much more mileage out of it, but at the very least it's a sobering blunt instrument to the eardrums when I'm in the mood for the densest, simplest and most pissed-off sound that this sub-style can mete out.