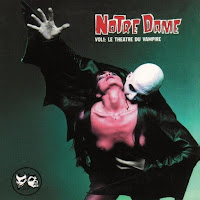 Though some might say it suffers from a bit of an identity crisis, Le théâtre du vampire is certainly a crazy record that lives up to the vision that it presents, an almost vaudevillian pursuit of extreme metal which fuses a number of sub-genres together. The band name and title might trick you into thinking this was some French Gothic black metal outfit, but in fact this was a Swedish project assembled by the prolific Snowy Shaw, who performs most of the instruments here alongside a former partner 'Vampirella' and at least one real and one other imaginary musician who bear the surname 'de Sade'. So right away, just from the handles you can tell this was going out for something cheesy, perhaps Shaw seeing the success of groups like Cradle of Filth, Dimmu Borgir and...Ancient, and being the diverse performer he is, deciding to throw his hat into that ring...

And what a circus this debut is, a mix of black, thrash and groove metal dressed up in all the Gothic architecture and theatrics you would have expected just from looking at its evocative cover photo. A lot of people would probably liken this most to Cradle of Filth, and that wouldn't be too far from the mark, at least when the band is executing a faster, black/death riffing strategy as in "Le Theatre Du Vampire" itself, or "A Sleighride Through Transylvanian Winterland". But I found a larger portion of the record more measured, more inclined towards Gothic rock or doom metal influences laced with bigger, groove metal guitar riffs redolent of when a lot of thrash was jumping those hurdles earlier in the 90s. However, they don't exactly start kicking out the frantic Jonathan Davis vocals, these parts are still draped in a mix of manic whispers, female spoken-word or operatic sections, as well as mid ranged vocals that have a biting, creepy Gothic edge to them. I'm probably not doing well to sell the experience, but it's actually a fairly catchy combo even though it comes off slightly scatterbrained.

It's definitely hard not to start laughing through a track like "Black Birthday (Hip Hip Hooray)", but even then the band doesn't seem like its intentionally trying to amuse you, and because of that this disc can get a little awkward, almost as if there was some space here where more creative ideas could have been slung together, but Shaw and company just went for something a little more lighthearted and silly...meanwhile the guitars are still pretty cool there, thus the weird contrasts. The black metal rasps also get a little too crumbled, almost as if he's snarling them while eating cereal or his throat is literally drying up as he's delivering each line, and it's unintentionally comical even more than Dani Filth's mode gremlin-like moments. But despite the cringe factor present, Le théâtre du vampire rarely comes off as if anything less than a good effort was put into its composition. Even the 15 minute closer "Spiderella's XXX", which plays out like a sampling dish of everything else you find on the album, propped up with even more haughty Operatic garishness and weirdness, seems like there are a few memorable ideas tossed around. So this record just barely gets a pass from me, if you could imagine black metal being conceived at a Big Top or freakshow rather than a desolate castle or woodland, this seems to follow that angle of development.