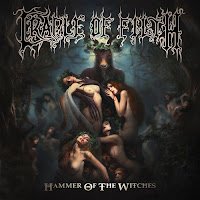 Although I personally felt that Cradle of Filth regained its footing on the 2008 album Godspeed and the Devil's Thunder, after a string of pretty average releases (after Midian), I think the consensus is clearly that Hammer of the Witches was their most impressive outing since the 90s. A lot of folks that had written off the band forever seemed to be back on the wagon, and it even garnered a measure of respect from some of the band's longtime detractors. I don't think it's hard to tell why, as this was arguably the heaviest and most focused recording they'd released in many years, and even though I might not harbor the same level of reverence as others, I've grown to appreciate more than the albums that lead up to it, Darkly, Darkly Venus Aversa and The Manticore and Other Horrors, both of which I do enjoy and might even hold up as a little more creative than this successor.

That's not to take away from what the band accomplished here, a 56 minute rager of a record which played to me like a natural successor to their classic Dusk and Her Embrace, albeit with a better integration of the symphonic and haunted castle components and a broader selection of riffs which built upon everything the group had really accomplished in the years between. Most importantly, I think the production here was a step above so many of their works...generally I might have an issue with one or two instruments or vocal 'personalities' taking a back seat to the rest, but I cannot think of a better example than this of when they all were balanced so well together. The grunts, growls and gremlin snarls of Dani Filth, the professional if still somewhat goofy female operatic parts, the panoply of shimmering synths and organs, and rapid fire drumming of Marthus Skaroupka, and of course the riff selection, which continues to walk the line between thrash, death, black metal and even some more aggressive heavy metal parts. That Cradle has all this weaponry at its disposal and can seamlessly plug it all into the whole of their aesthetic remains impressive.

For me, the favorite aspect to this band has always been Dani's florid lyrical treatments, this idea that he was like a Wordsworth of occultism, dark mythology and salacious Gothic smut, and as usual, even on the band's weaker records, the stuff he's written here is a pleasure to pore over line for line. Lots of verses here in tunes like "Deflowering the Maidenhead, Displeasuring the Goddess" invoke Martin Walkyier's vile meter and inflection, but of course Filth partitions this out into the various little personas created by his gutturals and higher pitched, effeminate rasping. He reacts well to just about every riffing change-up through the album's duration, which is saying a lot because the guitar duo packs in a lot of value for each track...individually, they might not seem complex, but there's just such an exhibition of riffs flying by on any region of this recording that it's hard not to be floored by the sheer effort it must take at remembering them all. Bass doesn't always stand out here as much, unless it's given the chance during a break, but you can always hear it hovering along and keeping the few fractional spaces between the guitars busy and the ears trained. Skaroupka's drumming is just ridiculous, and that he's also performing the keys and arranging the orchestration goes to show how overall valuable he's been as he's evolved through the band over the prior decade.

Hammer of the Witches is a pleasure to experience on the whole, though if we were to really break it all down, it's a refinement of riffing progressions, and a set of balancing scales between aggression and eloquence that won't be new to anyone familiar with their output. I myself found few of the sequences here to be truly memorable among old favorites from records like Midian, but even having said that it's an effort that I continue to sit through on occasion and listen to entirely rather than just cherry-picking individual tunes. The creepy orchestration and operatic interludes are very well done if you want something to conjure up that Transylvanian landscape you no doubt associate with the British veterans, and the prowess of the instrumentation and cohesion of the compositions is undeniable when you sit back and realize the scale of what they write, and how much is going on in so many of these songs. Love them or hate them, this album doesn't sound like they've lost an ounce of energy since they dropped their debut over 20 years before it...in fact it sounds like they've only ramped up their lascivious frenzy.