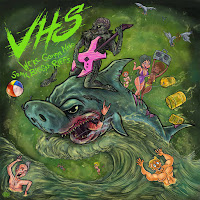 VHS might be one of the first bands I've come across purely through social media; I initially saw their page recommended to me, must have been on Facebook, around the time they put out their debut Screaming Mad Gore back in 2016. Their name pretty much says it all. If you were 'privileged' enough to be around during the old Blockbuster rental years, renting or purchasing stacks of VHS tapes for horror and exploitation films, felt the campy thrills and gnarly shocks of all that formative sleaze and gore, then you already know what these Canadians are all about. Most of their tunes are either direct or indirect tributes to specific creature and slasher films, served up on a pallet of dynamic riffs that cover a good array of sub-genres.

Sure, VHS fits pretty snugly into that largely West Coast US scene of schlock horror acolytes that includes the likes of Exhumed and Ghoul, with a healthy heaping of other acts like Cropsy Maniac, Macabre and Impetigo. They don't take things all that seriously, but they obviously love what they do, and without much sense of irony, even the cheesy films and stories to which they pay homage. The cartoon cover art only adds to the charm that these are a bunch of guys who might be hanging out in a garage or basement in your neighborhood, 80s posters on the walls, B-movie slashers on the TV, lighting up a joint or a cigarette, pounding some brews. Enjoying every moment of it. As you should be if you were hanging with them. Somehow, they manage to translate that feeling into a competent, entertaining mix of thrash, death, punk and grind aesthetics captured in a bright, loud, meaty production through which every neck-straining riff is felt straight to the face. I would say that the central style most relied upon is thrash, which comprises a lot of the energy here, from the more uptempo material to the breakdowns, but they certainly go off on whatever tangent they feel without the album ever feeling strained or like its trying too hard to please everyone.

The more gruesome elements are in the vocals, a set of low gutturals and rabid snarls which hearken back to the tradition of good ol' Carcass, which is no surprise when you saw the other bands I had compared this to above. All of these are performed quite well, although you could say they were fairly standard for their styles, not especially gruesome...maybe the sustain on the lower growls when they are sustained for more than a second, but otherwise just functional, fun vocals, and they go well with the bigger grooves on the album like in "Marine Monstrosity". When it comes to the more hard hitting, structured death metal riffs that alternate with the thrashier parts, you definitely pick up vibes of mid-paced stuff like Obituary, Bolt Thrower and earlier 90s Cannibal Corpse. Melodies and leads are no strangers to the Canadians, who spice up several of the tracks so you're getting a little more than a one-track beating, they clearly put a lot of effort into making the 14 tracks on this album varied enough that they all actually mattered, without one feeling too repetitive of another.

Toss in a tight rhythm section, some guest vocals from Matt Harvey (Exhumed) and Trevor Strnad (Black Dahlia Murder), lyrics about your not-so-guilty favorite films like Lake Placid ("An Old Lady and Her Crocodile"), or Creepshow 2 (or least I think that's what "Oozing, Bubbling Black Mass" is about), and you've got yourself a pretty good time. The focus isn't entirely on nautical horror flicks but certainly with the cover art and a number of the tunes that is a prevalent theme (they've even got a "Zombie vs. Shark" song). Have you heard a lot of this stuff before? Certainly with bands like Ghoul, Blood Freak, Frightmare, XXX Maniac, among others, but it doesn't really get old when you're having fun with it, and We're Gonna Need Some Bigger Riffs surpasses Screaming Mad Gore with exactly what it advertises.