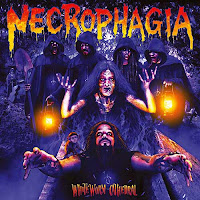 Covering WhiteWorm Cathedral after the passing of its creator Killjoy is a bittersweet task, since this would be the last studio full-length recording by what is his best known project, Necrophagia, or at least the one he poured the most sweat and blood into for over three decades. My history with this material is more often miss than hit, I've long admired what he was going for but just never thought the balance of the grisly death/thrashing and cult horror aesthetics was ever perfected. Killjoy was never concerned much with strict musical evolution when it came to nuance or proficiency, the riffs you find here are hardly more complex or unique than what he was putting out in the 80s, and that is both a boon and a curse with the material on this swansong.

WhiteWorm Cathedral is possibly his best produced Necrophagia album, with a huge, plodding, and direct sound that fully embraces its simplicity. The riffs throughout the entire album are very basic, slow or mid paced thrash riffs with a bit of groove metal or doom in spots. It's not exactly laconic or boring, but when the speed picks up, as in "Elder Things", some of the personality is lost until you hit that breakdown. And that's really what this album is about...chugging, heavy as fuck rhythm guitars that won't let you stop moshing unless you've heard all the patterns before a thousand times and don't really care much about that. Guilty as charged on that count. Sure, I found my head slowly bobbing to some of the charnel grooves, but even when I got into the swing of things I just never felt rewarded with some amazing transition, chorus or elevation to what was happening. It's not exactly samey or redundant in terms of how the riffs are put together, there is some variation throughout, but they just never seem to hit an interesting chord progression, they just belt you across the jaw with what you'd expect, and in a way I feel like the strong sound quality here was partly wasted.

The samples, organs and other 'horror' effects are sparse but tastefully executed right behind the pump and pummeling of the metal instruments, and the bass is fat as fuck, with the drums sounding nice and snappy for the rock beats they are usually devolved into. Killjoy's vocals are probably the star of the record, enormous, powerful snarls that you can recognize right away, laden with some echo and reverb that really carries across even the potent, blockbuster rhythm section. Sometimes this album sounds so much like nasty death/thrash for cavemen that you can't help but feel its pull towards whatever mammoth hunt is taking place; like in the track "Coffins" where those tried and true vocal patterns and the bluesy segues really help drive the meaty chugging home; or "Rat Witch", with its little swerves towards dissonant mystique among the crunch of the palm mutes. Add in the bells and general atmosphere, and that last one is probably one of my favorite Necrophagia tracks, extremely straightforward but not really needing much else.

In a way, the album gets points for just doing its own thing. It's not emulating other elder bands because Necrophagia IS one of those elder bands, and it's not some technical brutal death metal or goregrind exercise...this music is brutal because it's just produced so fucking heavy with a minimal structure that relies almost entirely on that bonecrushing tone. It can be fun to break out, and it's better than other efforts like The Divine Art of Torture or Harvest Ritual Volume I, but I'm still a little saddened by the fact that, with a little more gestation and atmosphere, this could have been the album that knocked it out of the park for me, and now it's just not going to happen. That said, if you enjoy really simplistic, snarly, growly, evil death metal with no pretensions, or you like the cult films that inspired some of these tunes, then you might at least give this one a whirl.