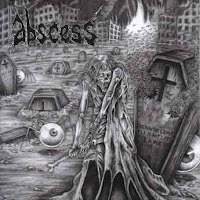 Dennis Dread has got to be one of my favorite cover artists working today, and California's filth merchants Abscess had the honor of dressing up their records with his distinct black and white artwork numerous times, my favorite of which was 2007's Horrorhammer. I'll also go against the grain and say that this was hands down one of my favorite albums from Reifert's post/pre-Autopsy project, while understanding the complaints against it...that it's not quite so gruesome as their output before it. But I'm not going to lie, I've had a bit of fun when cranking this record and I love its focus on the more upbeat material and really clobbering you over the ears. Horrorhammer lacks any degree of subtlety, it simply lives up to its title and for that I am grateful.

I'm not saying I entirely love the album, but when I'm in need for a grisly, high-body-count reel of death metal, speed metal, crossover and punk, graced with Reifert and company's unmistakable vocal ugliness, this one scratches my nethers. You could think of it as a halfway point between Autopsy and Seattle splatter-gods The Accüsed. Velocity meets carnage on a freeway of cult exploitation, but I don't want to mislead you into thinking this is monotonous. There are some faster, simpler cuts here like "Another Private Hell", or mid-paced like "Four Grey Walls", which are essentially pure punk adrenaline made different only through the vocal presence, but quite a lot of them have brief, slower sequences, sometimes just an atmospheric clench on a few dissonant chords, or some of the obvious death/doom that creeps back into the sound with a cut like "When Witches Burn", one of my favorites in their whole catalog. I love the guitar tone this time, not too abrasive but keeps its corpulence whether fast or slow, and sounds great with the rocking leads that often burst from the rhythms like a cannibal baby from its womb.

The drums and bass sound equally cool here, but all of this stuff is simply in support of the undead elephant in the room, those abusive vocals, just as loose and unhinged as Chris' mainstay, and thus more genuine feeling than most monotonous guttural orators which don't sound nearly as sick as they'd like. And even better, they sit equally as uncomfortable across whatever genre component Abscess is using at the time...the more accessible punk parts, the speed/death licks or the doomier sequences. Just enough effects on them at points to make them feel as if they're raving and barking at you from the sepulcher, or chasing you down a tight alleyway at night behind the butcher's shop. To some it might seem a bit garbled, but the energy there completely matches the waxing and waning of the musical muscle, or the oft-shoddy transitions between sub-styles. The instrumental title track is cool, as are the lyrics, simple and gory as they are. To be honest, there aren't a lot of truly catchy riffs, maybe a half dozen on the disc. But when those do appear, like the intro lick to "Hellhole", they do kick some serious posterior, and it's an album so compact I find no problem listening through the entire 35 minutes, as it congeals together so well like clotted blood.