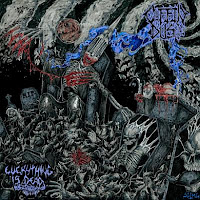 Coffin Dust unquestionable hails from that same death/thrash tradition pioneered by Carcass as they distanced themselves away from their goregrind origins. More recently that mantle was taken up by the family of bands that includes Exhumed, Impaled and then Ghoul, who have been running with it since well before the British butchers reformed. Yes, that was sarcasm. There's at least one member here who has played live with Exhumed, and the roster and ex-members of this group have a pretty vast repertoire between them which encompasses a number of sub-genres. Put it all together and you've got what I might dub a more 'organic' sounding proxy to Matt Harvey's deathgrinding flagship, one that differs in production and also in some of the songwriting nuances.

I enjoy that the record is book-ended with a pair of swollen, dark synth parts that set up the vintage horror aesthetic, but I'm not sure the rest of the material here really matches it other than the themes running across the lyrics. Instead, this is a very crisp, spry blend of tremolo-picked death metal lines, faster 80s thrashing progressions and even a good chunk of crossover/hardcore when the band wants to barrel roll into something more straightforward. The rhythm guitar tones are quite natural feeling, not as heavily saturated as, say, Exhumed, and this lends itself to a lot of slick, speedy little guitar licks which were quite consistently catchy throughout the six originals here. Even better, there are a lot of interesting little lead guitar blitzes that give the whole experience a bit more depth than I had expected, and these two are dispersed throughout the origins and helped hold my interest even in the few sections where I wasn't on board with the rhythm passages. Hooks for days, not that you haven't heard their like before, but performed with some engaging energy.

The bass throbs along the low end, occasionally walking off on its own groove, but I also wanted to compliment the drumming here, which is quite solid, with some cool little shuffling beats used to perk up sections of tuns like the titular finale. The vocals are a satisfactory guttural for the most part, well fit to all the sub-styles being blended into the record, and actually helping mold them into one whole, and there are also a lot of snarl/growl dual vocal parts which is par for the course with just about any band in this niche. The cover of Slayer's "Metal Storm/Face the Slayer" is quite well done, and fits in fluidly with the original tunes, revealing its obvious influence on the thrash side of this Pennsylvanian newcomer. All told, the album is a compact 35 minutes, I was never lulled into any sort of boredom. A few of the more hardcore styled riffs didn't do a lot for me, but these were easily compensated by all the quirkier little melodies and speed/thrash licks. So if you're looking for a band in the vein of Exhumed, Ghoul, Frightmare, or Ex Dementia, but with a slightly less blood & guts production style, this is well worth a listen.