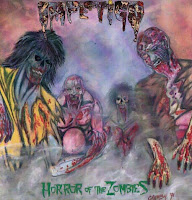 Horror of the Zombies is not much of an evolution upon its older sibling Ultimo Mondo Cannibale, which is to say that it remains the most basest of death metal songwriting, minimal riffing that would make even Autopsy of this period look more complicated. But as I said with the debut, it was never meant to be. Impetigo celebrated the crudeness of the form to a fault, far more obsessed with how they dress up their tracks with lavish serial killer samples than they are at crafting any sort of nuance within the rhythm progressions, drums or vocals. For a lot of their audience, nothing more was needed, and if I'm being honest, I feel much the same provided that the experience on the whole provides some memorable atmosphere or guitar parts, which Ultimo Mondo Cannibale didn't.

But this album does. Granted, this thing is dumber than a rock. The chord progressions all seem like the emergent British grindcore gods of the late 80s being strung out and slowed to a moderate hustle, or crawling along with the first few notes that come to mind. There's a little more to riffs like the one that opens "I Work for the Streetcleaner", which seems like it could have wound up on the Death or Obituary back-lot, but in general there are painful few here that stand out among others. What gives the record its charm are the frilly, weird leads that almost sound like insects approaching your ears when they appear, because you're just not expecting them. Or the blunt growls and garbled grind snarls of Stevo Dobbins. The bass guitar is thick, and buzzes you like the swill at the bottom of the communal coffee pot when nobody bothered to bring in any new filters for a new batch. The drums clang and thump along like an array of pots and pans in the background, not to say that they don't catch and anchor all the right grooves, which make up well over 50% of the album, these sodden, loping, knuckle-dragging bludgeons that well-represent the gaudy undead crew on the cover.

The samples are pretty good, if you're okay with bands using them so often, and they certainly set the tone that this band loves its cult horror, murder and exploitation, which is in my estimation their most influential aspect. You'll recognize direct film references like "Wizard of Gore" and "Trap Them and Kill Them", all of which would go on later to inspire (and even name) many other bands, so these Midwesterners had their shit together when it came to their taste in the obscene. I like when they go even more over the top with the atmosphere in something like "Cannibale Ballet", where the drums set the stage for some warped, freaky vocals that seem more like some emulation of a soundtrack rather than a metal tune. Frankly I'd listen to an entire album of Impetigo engaging in such absurdity because it suits them well. The lyrics are solid, simplistic but effectively written with some ghoulish imagery, and there are also a lot of grooves on the album that still sound perfectly moshable by today's standards.

Like Ultimo Mondo Cannibale, this is so primal that it just doesn't age, there is some gruesome impulse at the core of all of us which can appreciate how straightforward this is, and certainly if you haven't heard the band but enjoy records like Severed Survival, Cause of Death, To the Gory End or The Dying Truth then this is a decent, if not exceptional gibbet of gore slathered in that old Wild Rages Records cheese. If your battered VHS and DVD collection looks similar to the local butcher block, then its a given. I don't always break out Impetigo's records as much as their peers from that seminal period of death metal, but when I do, I prefer Horror of the Zombies.