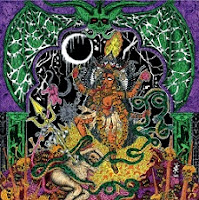 Devil Master's Satan Spits on Children of Light is one of my favorite records to come out in 2019, so I was naturally curious to check out more of what the musicians behind that have released throughout the past, and as it turns out, two of them have been involved in an even longer-lasting project called Cape of Bats, which has tread a similar stylistic path over a wide array of demos and split recordings. Violent Occultism is the one full-length to date from that entity, and I'm surprised it's not spoken of more often, since it's an effective merging of black metal and punk aesthetics. Not quite as evil, and not quiet memorable, but still filthy and formidable enough that fans of the one will almost certainly get a kick out of the other.

Essentially, Violent Occultist is hardcore/punk given a rubdown of raw black metal production, and splatter-sounding punk vocals that at times definitely approach a rasped inflection. Into this they will integrate some more melodic or tremolo picked metallic sequences that help the tunes straddle the line between the genres. For me, riff selection is absolutely critical to punk rock because so little of it sounds more than lazy plagiarism of predictable patterns, and I think Cape of Bats definitely pass that test as they go for progressions that feel a little more like ticked off, antique hardcore (Minor Threat, etc). These chord choices do a great deal to help the band careen off them with the more metallic pluckings, half-wrought sloppy leaps, and evil melodies that ramp up tunes like "Death Kami" to the next level. They're not perfect, I mean I've heard a lot of these riffs in the past, but just unique enough to make it all feel fresh as a sum package. Bass is not a factor, just tinny sounding drums, hissing garage black metal guitar tone and vocals that sound shat straight out of hell.

The songs run a range of very brief to somewhat dense for the style, and there's plenty of variety among the thirteen. Creepy synths, a few watery, spooky goth rock guitar lines and other nuances help break up the material so it just doesn't feel like you're being hammered repeated by the same tricks, and I found myself actually favoring the tracks here that were around three minutes or higher, like "Weeping Daughters of Jerusalem" and "Ultimate Evil", which were genuinely creepy and stick with you about as strongly as most of the Devil Master material. The lyrical subjects here are also really cool, drawing on diverse occult themes from all over the world, almost coming off too brainy and philosophical for the music itself, but then again I really enjoy that contrast. Diego Bureau's cover artwork really seals the deal; colorful, grotesque, and frightening. This is a rather cool surprise and well worth checking out if you're into their other project, or really any sort of black/speed or black/punk hybrid as long as you're cool that they play it really...fucking...raw, not enough to bleed out your eardrums but you may develop a headache at the appropriate volume.