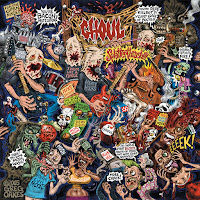 While Ghoul might have ramped up the silliness of their project with the cartoon collage cover art on Splatterthrash, their third full-length, the music was anything but. And that's honestly one of the things I so admire about the West Coast creeps, how they marry such an amusing, goofy gimmick with a seriously excellent riff set and dynamic songwriting which never really got dull through the majority of their career to date. I know there's a massive backlash we always see against 'joke bands', but I'm not sure this one even qualifies for that category since they put more effort into what they're doing than a large portion of the serious bands. But sure, Ghoul is a band you have fun to, laughing at their Creepsylvanian lyrical concepts and send-ups to the horror/exploitation genre."

Like its predecessors, Splatterthrash serves up a lot of influences, but it's mainly a mesh of crossover thrash and the more melodic death/thrash direction groups like Carcass were taking as they evolved a little further away from the grind roots. Certainly you can still hear a grinding pulse behind even this material, but a lot of the tunes go directly for mid-paced mosh-pit service ala "Mutant Mutilator" and "Merde!", which definitely have an Exodus thing going if those Bay Area legends had used a dueling guttural/snarl vocal styles which is also a throwback to Carcass. In other tracks you hear more of a punk or d-beat momentum made crisper by the more palm muted picking styles. In either case, it's the riffs that really steal the show on this album, they're endless catchy, especially the heavy usage of melodies throughout the tracks that almost give the album a more serious tone than you feel it should have, thanks to the atmosphere they automatically spark in the horror-nerd's brain. The way the album opens with "Into the Catacombs" is extremely memorable, with the creeping little guitars picked behind the acoustics and eerie harmonies.

But the other influence I haven't brought up yet is their continued commitment to surf rock elements, occasionally implemented as little bits of cleaner guitars over heavier tunes, or in an outright surf rock extravaganza like "Psychoplasm", which crafts morbid Dick Dale-like guitar lines and then adds all manner of rockabilly or spooky Western style chords in with samples of evil laughter. A lesser band might choke up the flow of their albums with such a stunt, but this isn't the first time Ghoul has pulled it off successfully and it's yet another reason they always stand out. I'd say the lion's share of the material on this album does stick pretty close to the thrashing, though, with riffs that give you the similar feel of a "Toxic Waltz" or S.O.D. tune but wound up with slightly more complex little melodic threads that are meant to spook up the tunes a little so they stay more in line with the band's perpetual Halloween theme. They also make a judicious use of gang shouts which should help keep all your pizza thrashing buds in step (as if they already don't love this band).

The production here is all boxy, organic guitars for the rhythm tracks, with the leads and melodies processed just enough to give them an otherworldly atmosphere. The clean or reverbed surf guitars fit in smoothly, while some of the samples and effects are hit or miss, for example the mechanical vocal filter in "Rise, Killbot, Rise!!!" doesn't sound so great against the music. Bass is good and chunky like a bunch of half-chewed apples bobbing in the party punch, and the drums sound nice and snappy on the high end to help balance off against those thicker guitars. All in all I wouldn't say it's the best mix on a Ghoul record, but its more than functional, and if this band scratches your itch you'll be having too much fun with Splatterthrash to really give a damn. The lyrics are also night and day, for instance the title track is your typical self-flagellating band anthem whereas "As Your Casket Closes" is more elaborate with its imagery. Some of the band's novelty might have worn off here, and I still have a slight preference towards We Came for the Dead!!! and Maniaxe, but this album makes for a fine conclusion to the aesthetic pseudo-trilogy that marked the band's earlier years.