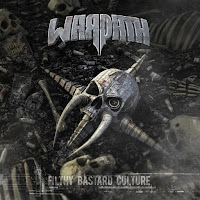 Ever since I did a review swarm covering the evolution of German thrash through the 80s, 90s (and beyond), Hamburg brutes Warpath have proven one of several control groups in how to approach the medium in as banal a fashion as possible. Now I don't take any pleasure in constantly harping on a particular band, but their 90s records were constantly the very definition of mediocrity (at their best), and after the gulf of two decades, their return with last year's Bullets for a Desert Session showed startlingly little growth, even after the career nadir Kill Your Enemy that dropped in 1996 to barely a scrap of fanfare. Now normally I might have set this pull a 180, and regale you with my shock and awe that these guys have finally dropped a worthwhile album, but Filth Bastard Culture is sadly nowhere near deserving of such an accolade. I admire the band's persistence, and they manage to hang on to a Massacre deal, but man was I hoping it would be different this time.

Okay, let me back up and make one exception...this record has the best production I think they've ever presented us with. Clear, powerful chords, abrasive and grooving rhythm section, gravelly and angry vocals, and even the few embellishments like the symphonics used in the title track sound quite good in the mix. I struggle to call this much of a 'thrash' metal effort at all. The band has always had just as much of a tie to the blunt instruments of groove and nu-metal throughout the 90s, while not nearly as annoying as most bands to bear those descriptors. The stark simplicity of the chords here, running through predictable, bouncy cuts like "Back to Zero", often reminds me of the metallic derived elements of New York hardcore, and many of the riffs are purely rock or punk injected, differentiated only by the more growled vocals that seem more indicative of aggressive thrash. As I hinted above, Warpath does try a few deviations here, like the orchestration used to kick off and accompany the title cut, or the slower paced "Believe in Me" with its clean, deep vocals and guitar lines that lead into the bruising of the distorted chords..."St. Nihil", with its doomed gait. Alas, these just don't bring the 'catchy' any more than the rest of the material...

There is some thrash, to be fair...like "Killing Fields" with its Black-album Metallica pacing, or a couple other tunes with thick palm muted phrases ripe for 80s urban moshing. There are a handful of melodic or lead-like elements, as in "F.U." (come on, really?), but these seem a little subdued, as if the band isn't confident enough to slather them over the brickheaded grooves. And that's another thing, the titles and lyrics all seem rather bland, not that this is always a dealbreaker to me, but when there's not a lot of music to value, they definitely can drive an experience further under. As a total package, Filthy Bastard Culture offers just so little aspiration, so little genuine nastiness, comparing this to their 80s German forebears like Destruction and Kreator is like having a Cro-magnon emerge from its cave, to see a jet or helicopter soar above for the very first time. Nothing risked, nothing gained, and after over a quarter of a century, I'm not sure anything ever will be. Far from the most incompetent band I've heard, yet a long way from making any progress. I'd hesitate to say that it truly 'sucks', but the most memorable aspects of this album are the production and the fact that they're still packing that logo which looks a lot like New York thrashers Whiplash.