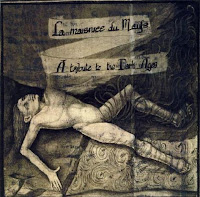 I'm years late checking out this four-way split, but as a fan of three of the four French bands participating on my way into it, I figured it was just about mandatory. The common thread running through the creators here, apart from the shared nationality, is that they all have some devotion among their own projects to atavism, diving into the distant past for lyrical and musical inspiration, and I feel this micro scene, more prevalent in Europe than my own USA, offers a cool counterbalance to the more modernized strains of black or death metal which head off towards more progressive ideals. I also thought the layout for the split album was interesting: at about 31 minutes, three of the four bands all feature an instrumental intro or outro along with a harder, metallic track.

All three of these instrumentals consist of a clean guitar component, with Aorlhac's album opener being the most purely rustic and folksy, pure acoustic bliss. Darkenhöld's is a little more dingy and tribal, with some ambient sounds hovering just at the crest of the guitars. The finale of the split, Ysengrin's "Herege", features some electric guitar along with the acoustic, and cedes into a more funereal synth as it comes to its close. All three of these pieces were very well done, highlights of the recording, and for their small differences flow together rather well with one another and the slightly divergent styles of the bands. Fortunately, just about everything else on offer is also worthwhile, from Aorlhac's savage, riffy "Les charognards et la Catin", to Darkenhöld's mid-paced, evil piece and fittlingly titled "Eerie Plain at Dawn", to Ysengrin's morbid amalgamation of death, doom, heavy and black metal "La Procession Noire" with its more atmospheric, guttural vocals and weird, snaking riffs and leads. Each of these tunes is quite fluid with what the band was releasing individually at the time, and like a lot of their material easy for the Dark Age headbanger trapped in the 21st century to lose oneself in.

Ossuaire was new to me, but their sole track also seems like a microcosm of what their peers had on exhibition, with some acoustic guitars that transmute into some chunky, dissonant black/death metal with, yet again, guttural vocals rather than the black rasps that you'll hear from the first two bands on the split. I did think this tune was okay, but perhaps my own issue was the dingy, dissonant tones and overall production once the heavier sections kicked in stood out a little much from the rest. Some of the style here reminded me a lot of another French band, Suppuration, which is cool, and I did like this enough that I'll track down their 2010 full-length Mortes Fables at some point to check it out, but I'd say of any of the selections for this release, it was probably the one I would have cut out to make the rest flow a little more smoothly. That aside, and its a minor gripe at best, La Maisniee du Maufe is a very cool release which delights for much of its runtime. France has by far one of the best scenes in all black metal these years, and even though the bands included on this would be considered second or third 'tier', they are all well worth hearing, following and supporting.