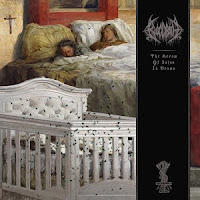 The Arrow of Satan is Drawn is one of those albums I want so hard not to feel disappointed with that I've burned out trying. Ostensibly the record that would really capitalize on the band's direction from Grand Morbid Funeral, there was only one lineup change here with Joakim Karlsson of Craft stepping into Per Eriksson's slot on the second guitar. I was truly hoping that 'Old Nick' Holmes would settle into his sophomore outing with the supergroup and crush this out of the park, and that the riffs would gel a little better than they had on the 2014 album, back to the level achieved with their earlier lineups on records like The Fathomless Mastery and Nightmares Made Flesh, but what comes across here is a jumble of ideas that just doesn't quite come together for me until it's too late.

Aesthetically, there a number of positives to this latest Bloodbath outing. The cover artwork is interesting and disturbing. The title is cool. The commitment to an even more repulsive production than Grand Morbid Funeral could have wound up something compelling. Nick's grainy growls still felt like a fresh change of pace from the more polished gutturals used in the past by Mikael and Peter during their tenure within the group. The lyrics maintain that vibe of recapturing a lot of the death metal tropes of the 90s, which really remains the whole point of this project. The production, while looser and more murky than any of the prior albums, does have the necessary punch to impress Swedish tone-a-philes, and they manage to spruce it all up with some atmospheric, higher pitched guitars that occasionally add a level of creep to the proceedings. But fuck if this album takes so long to deliver anything of any lasting value...the first half of it is almost completely devoid of the good riffs that stick to the ears for more than a couple moments.

Where is the "Year of the Cadaver Race" for this album? The "Outnumbering the Day"? "The Soulcollector"? Or "Devouring the Feeble"? Too few of the riffs present on The Arrow of Satan is Drawn are worthy of even sharing the same cemetery plots as some of their predecessors, and so the album has to aim for a more total atmospheric package that contains a lot of humdrum guitars which are unfortunately serviced as well by the crunch of the tone as they ought to have been. Granted, it's not the most roughshod recording in the band's catalog...Resurrection Through Carnage is much more cheap and torn sounding, but the issue here is that with the exception of the melodies or the disjointed leads that might explode over the meatier rhythm guitars, none of the progressions really stand out beyond the billion or so records out of Europe that have come along to share in the worship of the Swedish forebears like Entombed, Dismember and Carnage. Energy isn't the issue, since the production gives it plenty of hellish swerve, but the riffs feel too hastily thrown together as if just anything would do because HEY WE'RE BLOODBATH.

Even when they seem to get something really going in "Bloodicide" with those great, almost cosmic melodies, the rhythm guitars are just too mediocre. The latter half of the album is a little tighter and more appreciable, and they do try some varied song structures you haven't heard before in tunes like "Wayward Samaritan" and "Deader", but I was always left feeling like I'm hanging, that the results could have been so much better if Blakkheim and company just did a couple more run-throughs at the idea-stage, changing some of the chords here or there or the order at which they pummel through the track. I'm also just not convinced Holmes is the best man for the job here, as much as I've enjoyed a lot of his early Paradise Lost growls (and his other Gothic vocals), there's little to the rhythm and meter of his delivery that thrills me. It's gravely and grim like the path up to the mortuary, but once you've heard a couple syllables and sustains it gets old pretty fast.

This is far from a terrible album, but it's somewhat undercooked to my ears, and while this might have been a purposeful stylistic choice, to just scrabble together some death metal jams and go play a couple festivals, to not overthink it, I think it wound up in the worst of their full-lengths to date. Almost all the components were there for something great, but the execution escaped me.