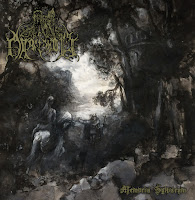 I've been drawn into Darkenhöld's brand of glorious, melancholic Medieval black metal since the very debut, and for years now they have been cementing themselves as a paragon of escapism. Though they play in a far more traditional vein than the 'Big Three' of the French scene (or at least my own 'Big Three'), they are with ease one of the more consistent in the 'second tier', and like their countrymen Belenos and Aorlhac there's a historical spin to the chosen themes, although this particular band dresses it up in a fantastical element. Essentially they're one of those black metal acts which would find appeal for dungeon synth fans, and vice versa, although their own exploration of that divergent style is limited to a very small fraction of their albums. Still, if you dream of castle walls, long rides across cold moors, or any other idyllic Middle Age aesthetics to permeate your black metal, then it's hard to imagine you wouldn't at least get something from their albums.

Musically the focus is on mid-90s black metal riffing, an admixture of scathing rhythms, dim chord choices and occasional swings into full-on, ale-pounding majesty that come out of left field. The mix of the album is very even, with the guitars, bass, drums, synths and nasty snarling of the frontman 'Cervantes' complementing rather than fighting with one another in the speakers. It's a firm medium between the rawer elements of the genre, and the more overly produced, big budged offerings of the Scandinavian luminaries and mainstays. The atmosphere is created through the graying moods of the guitars, adorned with organs and other synthesizer effects which fit them perfectly. There is one brief interlude piece called "La Grotte de la Chêvre d'Or" which you could consider full-on dungeon style synth, but otherwise the band is heavily guitar driven, with a heavy use of acoustic guitars that are seamlessly integrated along with distorted lines when they're not appearing alone. Some of the riffs are quite good, with occasional drifts into leads or melodies that stand independently of the rhythm section, but to be honest there are a number of forgettable or overly familiar patterns that would not stand out whatsoever if not for the sum atmosphere created on the album.

The snarl is quite good, but also akin to many you've heard before, so I'm thankful that they also do include some soaring, background choral vocals that make it sound like it's being broadcast at you from some mountain monastery. Memoria Sylvarum also keeps most of its tunes reined in at around 4-5 minutes, so they aren't so headstrong to think they can cycle endless waves of repetitive riffing at you in a vainglorious attempt to seem epic or profound. With a couple exceptions, Darkenhöld just charges into battle, as a convocation of black knights attending a joust, and then doesn't wear out its welcome, providing the listener an atavistic portal into his or her own fantasy. It's almost elegant apart from how it does occasionally deliver the savagery of the earlier albums by acts like Midvinter or Old Man's Child. While it's not my favorite of the albums they've put out to date, this does not disappoint, it's only marginally less engaging to me than A Passage to the Towers or Castellum, and yet again secures a catalog of consistency for a band that, Franc-ly, is not spoken of nearly as often as they deserve. Sorry for the terrible pun, it appears my jestering skills need some dusting off.