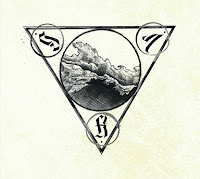 The only of the French black metal bands to feature on this 3-way split that I've previously encountered was Hyrgal, who released the very solid album Serpentine last year, also through local label and bastion of consistency Les Acteurs de l'Ombre Productions. The others here, Verfallen and Bâ'a, are actually making their debuts with this very release, and from the level of competency being exhibited here, I hardly think it will be the last we hear of either of them. What's more, the three bands all match up rather well in terms of overall stylistic intent, not to the point that they could be mistaken for clones, but it helps give the hour-long experience a very seamless transition between them, so at times I forgot I was even listening to a split and felt it was more of a concerted, complementary effort.

Bâ'a opens with a volley of fast-paced, highly melodic and sorrow-stoking black metal complete with some great bass-lines and added layers of orchestration at just the right moments for just enough of a transcendence. There are some breaks in the momentum, where the material becomes more longing and pensive, but overall they are just a well-rounded project with a multi-faceted attack that worked for me at any pacing. Verfallen feature some of the longer tracks on the disc, each over 9 minutes long and giving me some nostalgia for 90s melodic black or death metal with an intense blast beat battery and some harsh, nasty vocals. They too will throw in some segues where they move onto a more mid-paced, charging style or some softer guitars, but when they're firing on all cylinders I got the impression of a French Dark Funeral or Marduk, maybe some shades of Merrimack. They're probably the most monotonous of the three bands here, but I don't mean that in a bad way, the songs are just more grandiose in weight, there is still plenty going on to keep the listener's ear trained and not lapsing into boredom.

Hyrgal, the 'veterans' of this release, take things down a notch with a very somber, morose piece that moves at one of the slowest crawls, but packed with harrowing emotion and driving chords. A few parts of their album closer, "Sicaire", ramp up the pacing to flow more fluidly with some of the offerings of their compatriots earlier on, before then breaking down again into a soul-sucking climax with some multi-layered vocals, and lastly a wonderful ambient ending that trails off for the last 4 minutes, spacious and heavily distorted guitars ringing out before a torrential downpour cedes to some stormy swells of cleaner, sparsely strung notes. All quite breathtaking, especially after the near hour of time you spent building up to this, it's as if all the tension of the bands' material breaks at long last, drenching the listener in a chance to reflect back upon the journey. All thoughtfully constructed, and while these particular bands might not have the same level of distinction or creativity as some of  their better known countrymen, they're all quite good at what they do. Passion, savagery, escapism, such crucial components for black metal. France has a very rich scene in this genre, and here are three freshly blooming examples of why.