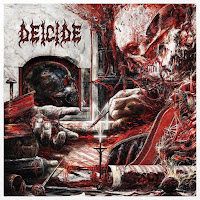 I've long been a picky listener of Deicide, appreciating the 'shock value' and importance they've brought to the death metal genre, but only rarely desiring to listen to much of their discography. Apart from the first two, which I listen to largely for nostalgia reasons (and not for the production, which I'm not terribly fond of), the record I turn to most often is The Stench of Redemption from back in 2006. This was an album that took the stock Deicide formula and gave it new dimensions through more melodic dynamics and the quality leads of the late Ralph Santolla, something appreciated in a catalog that largely featured dull, blunt riffing and the dual snarl and growl of Glen Benton, with little interesting songwriting to be had...

Ironically, Overtures of Blasphemy isn't some unique, transitional milestone for the Floridian Christian crushers, but it's a record that incorporates a little of that Stench of Redemption vibe, while at the same time reducing the riffing down to its bare basics, tremolo picked patterns and a whole lot of brute force chugging. Despite this, I've quite enjoyed it, because the riffs are tight and energetic enough, the songs so compact in their 2-3 minute formats, that each feels like an infernal burst of genre purity straight to the dome. Benton only uses his growl for most of the duration, competently executed, with only a couple lines where he'll break out a goofy snarl. Rhythmically, the band is a flawless machine. Asheim's kick drums sound like anti-aircraft machine gunnery, felling squadrons of angels at a time, while he can blast off effortlessly where the band wants to transform the mood away from the moderately paced churning and grooving. Glen's bass sounds about as fantastic as you're going to get when you're following the rhythm guitar so closely, with a meaty tone that feels like it can clog any of the diminutive air-holes between the chugs and chords.

Fine-tuned, hellish brickwork being laid out at unholy speeds, so when the lead guitars erupt they are always striking an excellent balance against the fury below them. These aren't always quite so catchy or explosive as on Stench of Redemption, and there aren't a whole ton of them, but they work very well where they exist and really round off the whole album. In terms of riff strength, there might be a lot here you'll feel like you've heard from this or another band in the past, but the production is just so spot on, the tracks so skintight that they feel like they're exactly what the songs required to remain kinetic and entertaining. One of Jason Suecof's best recordings to date, just honest and punishing and yet clear enough to let the smaller details through. The lyrics are about exactly what you think they are, and yet they are rather well done this time out, providing some memorable imagery along with the typical blasphemy. I'd also like to point out that Zbigniew M. Bielak's cover artwork on this one is astonishingly good, for me easily the best Deicide have ever had, and that really wraps this package up into something worthwhile. After a few spins, I was quick to promote this to one of my favorite albums the band has ever released, even if it's nothing novel or unique by any stretch.