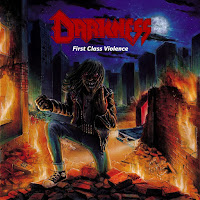 Say what you will about the fluxing quality of the various Teutonic second string thrashers' reunion era records, but there's no question that bands such as Vendetta, Accuser, Assassin, Necronomicon, Exumer and Darkness are committed to the cause. Not just taking one shot at kicking their midlife crises in the jimmies to reclaim their hopeful youths, but attempting to forge a genuine secondary career out of returning to the metals. As for Essen's Darkness, the 2016 comeback The Gasoline Solution was a competent and well executed thrash album that, to me at least, was right on par with their 1987 cult debut Death Squad, possibly the only album that many would remember from the band. With First Class Violence, they return for more of their no-nonsense, urban thrash which eschews any and all gimmicks, bells or whistles for the pure headbanging roots of the medium.

The results here were mixed for me. I find the album very well produced with appreciable nastiness, and lots of cool flourishes in the lead work and the atmosphere that takes me right back to a lot of US underground thrashers in the 80s, from Atrophy to Indestroy, not to mention the overt parallels to their own legendary countrymen Sodom and Kreator. However, about half of the tunes here suffer from some really banal rhythm guitar progressions that are entirely too dull and predictable. "Low Velocity Blood Spatter" is a good example, because it starts with some nice, dim harmonies and seems like it's about to explode like a mix of Artillery's By Inheritance and Kreator's Coma of Souls, but then devolves into some lame moshy parts. These are saved by the fiery energy of the band, in particular the lead guitars wailing out all over the place, or the meaty drum performance. In general, they just perform far better when they're moving along at either a faster paced with speedier picking redolent of Agent Orange, or a few of the peppier mid-paced riffs which recall Exodus.

There's also a similar mood or feel to a number of the tracks here where a lot of the guitar seem to blend together; don't mistake me, they all feel flush to the artwork and atmosphere that the album is trying to present, but a few more guitar parts out of left field would have rounded it out better. The band's newer vocalist Lee does an adequate job of delivering a nasty, sincere, splattering tone, but sometimes a bit too polished and punctual. As I mentioned before, the leads are fired up and inspiring throughout, when they erupt in tunes like "See You on the Bodyfarm" they almost always elevate their surroundings, and without any need to be overly wanky or technical. It's largely thanks to these that First Class Violence is still an album I'd recommend to pure thrashing fans who are looking for proficiently implemented throwbacks to that 80s Golden Age, which Darkness themselves were a small part of. The Gasoline Solution was slightly better, but a tune like "Born Dead" works for me in any decade, these gentlemen don't sleep on the execution.