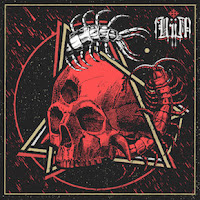 You might not see a metric ton of bands labeling themselves 'black n' roll' out there, but in truth the two mediums work well in tandem, and it's hardly a novel concept. A quick listen through first wavers like Hellhammer or Venom will reveal quite a few pure rock-ims; sure, they might be saturated in raw production that sounds alien to anyone looking for radio-friendly classic rock, but the simplicity and intent is laid bare. VCID is a French band which pretty much attempts to serve as a poster child for what that hybrid would sound like in 2018, and if you can set some expectation for that in advance you will find unfortunately find no surprises on their first full-length Jettatura. That's not to say this album is a bad one per se, because its clear production and thick guitars hold an estimable level of potency, but where even Satyricon were able to pull of a few evil, addictive grooves on their own 'black'n' roll' era records like Now, Diabolical and The Age of Nero, this one is all surface level, all straightforward and doesn't have much in the way of subtle tact or memorable riffing.

Jettatura is primarily mid-paced, driving rock-punk rhythms with a few slightly faster, dissonant chord patterns woven in and out for good measure. It shows a sort of parallel development to how crustier metal/hardcore bands of the D-generation write at moderate speeds, only with a brighter production level. Think Nails playing a Darkthrone cover, mitigating their anger a bit for a more bruising, cruising effect. It's not so sunny, rocky and punky as something like Turbonegro or  Kvelertak, but take that style and integrate some more mug-swilling, atmospheric and melodic disposition and you're in the right ballpark. In fact I'd say they sound most to me like the Danish band Horned Almighty, although I didn't enjoy this quite so much as that band's catalog which has a more cruel, abusive streak to it. The riffs here are just slightly north of 'stock', occasionally dressed up with a jangly little minor note fill so it's not just all meaty chords, or some occasionally chugging which will break off into a faster tremolo picked sequence.

A lot relies on the vocalist 'C' (they all use initials here), who has this very level, consistent and nasty rasp which is capable of some sustain to match up with the general mid speed of the instruments. C sounds loud and central to the mix, and about as professional as you're going to get, but at times I also though the vox were a bit too obvious and overbearing, without the little flaws and personality quirks that would make them stand out. Essentially it's a rock solid delivery over a rock solid base, with the drums and bass and rhythm guitars all adequate for a style of black metal that is the very opposite of flash. I think they do a fairly decent job of balancing out their two 'sides', but the issue I had for much of this was just that the black metal riffs are never evil enough, nor haunting, even when they clearly try to be. Some more experimentation, higher pitched guitars, perhaps some more unpredictable rhythm guitar patterns could really turn this around because VOID clearly knows how to achieve a high level studio sound. The album packaging looks cool, and they also have a really cool lyrical style which seems to flow like beat poetry when you read them outside of the music.

A lot of potential here, I just wish the band would go further out into the unknown. I think in the end, if you're really into that early Darkthrone black metal style but want it cleaned up a bit, Jettatura would hardly be a waste of your time, but the whole experience felt a little too stable and samey for what I'm looking for in this particular niche.