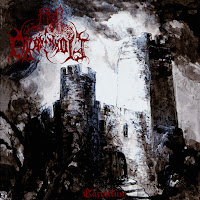 Castellum is the most straight-to-the-face of the Darkenhöld discography, choosing to eschew some glistening Medieval acoustic or synthesizer intro to savage the listener immediately with a strong, scorching eight minutes of "Strongholds Eternal Rivalry". Don't mistake me, within that track's parameters, there is already plenty of dynamic range, from the blasted Scandinavian verses into the more swaggering, mid-paced glorious chorus which sounds like you're rounding up a posse of disavowed knights to ride down and bring low some border lord's castle and militia. There are some nice acoustics in the bridge, with a cool, lightly fuzzed bass line, but it sets a reliable, slate-gray tone to how this album is going to sound as it celebrates the magnificent stone walls of the cover edifice.

The rest is business as usual, which is not a bad thing for one of France's greatest tributes to the Dark Ages, and Castellum is probably the least fantastical of their output, with tunes like "Le castellus du moine brigand" genuine historical references in their lyrics. It's also one of their best produced, along with the debut. Guitars have a nice crunch to them but also sound great streaming chords along to the faster drum tempos, and you can hear all the upper strings being struck to portray a few glimpses of atmosphere. The bass lines are tucked right under the rhythm guitar, and not doing anything terribly interesting, but they diverge just enough to matter in the context of the album's atmosphere. The synthesizers are as usual very well implemented, not too subtle but never brazen or disruptive to the metallic components. You very often feel like you're charging around a courtyard or a mountainside while the sunlight is gleaming down upon your armor. Cervantes' rasp here is not too far at the forefront, but it sounds just as good if not better than their other albums, and his delivery can get good and nasty to accompany a glorious piece like the thundering of "Glorious Horns".

You do get a dungeon synth-like, minimally percussive interlude in "Feodus Obitus" and the excellent, shining finale "Medium Aevum", but otherwise it's about 38 minutes of majestic and determined black metal which never thrives on being the fastest or meanest, but instead locks itself in canter with the atavistic imagery portrayed. There are some truly effective moments, like the melodies in "The Bulwarks Warlords" or the mystique-building depths of "L'incandescence Souterraine", but there's not a bad track among the bunch, and next to A Passage to the Towers... I think this is their best work, although all four of the full-lengths thus far have been in the same ballpark quality. Wholly traditional black metal baptized by just the proper amount of cinematic grace through the keys, and the Medieval trappings are something I'll never grow tired of.