Darkenhöld - Echoes from the Stone Keeper (2012) 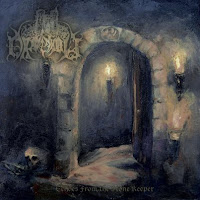 While not advancing the band's purview far beyond it's debut, Echoes from the Stone Keeper was a fine sophomore effort which continued to channel the mythistorical Dark Age consciousness into the 90s European black metal medium, fantasy and folklore into gnarled, atmospheric black metal that holds firmly to both its cultural and musical traditions. It might not dazzle as much as its predecessor in terms of 'surprise', hearing this great idea for the very first time as I did with A Passage to the Towers, but the necessary steps are taken to cement the band's style and penchant for solid, well-laid-out compositions which transport the listener, preferably the atavistic European individual or someone across the sea who wishes he or she were such, into grim landscapes of stone, forest and steel, where there was no cellphone onto which you could scream during your inevitable beheading by some errant knight or highwayman en route to some plague-infested berg.

It's a thicker sounding, blockier album than the first, as if levels were being tweaked between the instruments to try and even them out, and some slight calamity occurred as a result. Don't get me wrong here, Echoes is still quite listenable, but the dynamic range of its Passage was superior to my ears, and remains so, since I went back and listened to it before tackling the rest of their catalog. On a stylistic standpoint, this is very much that mid-90s style of black metal pioneered largely by bands out of Norway who early on applied symphonic elements as complements to the guitars. You could trace it back to Emperor, Limbonic Art, Old Man's Child, and their ilk, good influenced to have as they permit Darkenhöld to truly manifest the archaic, haunted majesty of their lyrical themes. The riffing here is quite solid, perhaps not always so unique but shifting about often enough that there is no real boredom anywhere, with tight-cropped tracks that don't their heads to spawn mediocre 'epics' that lack the ideas to fill them. Drums sound tight and appropriately crashy, while the guitar tone itself is good, the synths are laid out just right behind it all and the vocalist's rasp slithers right thru to coil itself around the listener's bewitched ears.

It's only when it all fires off at once that I sensed a little bit of clip or excessive evenness which robbed some of the individual components of their power potential. Sometimes the keys would shine forward a little much for the strength of the guitars, and so forth, but I'm such an admirer of this style and where it takes me mentally that it's not a great obstacle. The 'dungeon synth' like intro pieces, "Subterranean Corridor" and "Interlude" are well enough made, but perhaps not as catchy as the keys used in some of the proper metal tunes, and not as good as those Darkenhöld has used on some of its other albums. For this album, the more the band takes risk and provides evil riffing, the better the tunes seem to be, as in "Chasm of Asylake", but they hit a lot of mid-paced Blood Fire Death style sequences adorned with eerie symphonics or pianos that I also found quite agreeable. The lyrics are also worthwhile, whether you're into fantastical creatures ("Wyvern Solitude Chant") or alchemy ("Under the Sign of Arcanum"). All told, I'd say this ranked as their third best album, quite good but not as impressive as the debut or the album that would follow it in 2014.