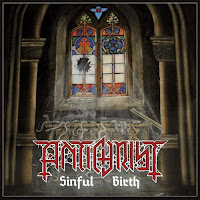 Being that the Antichrist debut album was one of my favorite metal recordings of the last decade, I was naturally chomping at the bit for its inevitable followup, slavering over the tracks I could scope out in advance of the actual release, and feeling entirely too satisfied by what I was sampling. Now that Sinful Birth is in my paws, and I've gotten past the whole 'it's probably not going to be as good as the first one' hurdle, I can honestly tell you that I've spun this sophomore a dozen full times in only a handful of weeks, and I'm happy to report that it takes the aesthetics of its predecessor and splays them out into an even more dynamic, threatening form with enormous replay value without sacrificing even a fraction of the intensity and entertainment meted out through Forbidden World.

This is essentially a pure, undiluted window into what an alternate timeline brand of blackened, sickening speed/thrash would have sounded like were it released back in the mid 80s. That's not to say it couldn't have existed in our own continuum, because the influences are worn upon its bloody sleeves like so many dripping spike-bracers. Slayer, Venom, Possessed, Kreator, Bathory, and Kill 'Em All era Metallica all stroll into a bar together to watch a band called Dark Angel performing Darkness Descend, and then some unholy, drunken amalgamation of those bands' rosters go back to a nearby jam space and try to replicate and record what they heard...in the process managing to one-up just about everything I loved about their individual sounds. If I hadn't already been exposed to hard rock and heavy metal since an age shortly after I could potty, a record like Sinful Birth would have made a convert out of me every. damn. time. Vicious, unforgiving, like trying to balance on the edge of a razorblade through almost its entire playtime, and possessed of an absolute disregard for just about anything that is currently cool, polished, or comfortable.

That's not to say it's the heaviest fucking metal you're going to hear anytime soon, but Antichrist, more than any other throwback thrash band, really feel like it belongs to the era it draws upon for its inspiration. These guys aren't trite, or trendy, nor are they sloppy. Buzzing guitars flurry past at a rate of nearly ZERO forgettable riffing progressions, with something even more exciting than the verses always waiting within their eaves, and leads that perfectly match the unhinged, frenetic pacing. A drumming performance that is arguably the MVP here...stacked to the roof with bruising beats, crazy fills, and militant cadences often used to escalate something like "The Entity", which is almost like a John Carpenter composition filtered through electric guitars and savagery. The bass lines might seem like the rear-guard to this formation, and they do their support duty well, but you can constantly hear them pounding and thumping away right up front in the mix and it just generates even more of a hellish, pugilistic atmosphere to a record that only lets up when it wants to surprise you, like in the melodic bridge of "Black Pharaoh" which sounds worthy of top shelf Deceased and would probably do even King Fowley a proud.

The one contentious element I've seen thrown about the intertronz are Steken's vocals, which seem to spoil the experience for some listeners...but not this one. The guy sounds absolutely volatile, oozing sinister and awesome serial killer lyrics all over the guitars, with a timbre that I could really only compare to vintage Don Doty excesses vomited out over Tom Araya's syllabic structures. Raving, barking mad, the antithesis of most thrash and death metal bands that place it safe with overbearing, overproduced gutturals and barks that sound like they're practically automated. No, Anton Sunesson is the real goddamn deal, a front man that I can instantly distinguish from the herd, and even though he doesn't exactly have the widest array of tricks in his repertoire, he doesn't need them, because this violence sounds sincere, and that ultimately lends Sinful Birth its timeless quality of dirtnap speed/thrash godliness, and if you don't agree I will gladly tear your patches off your sleeves and throw you in front of a train. Okay, I wouldn't do that, in reality I'm a pussycat, but listening to Antichrist MAKES ME WANT TO, and that counts for something. A lot.