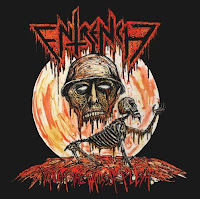 The first Entrench record, Inevitable Decay, was this awesome slab of Teutonic-infused thrashing nastiness out of Sweden that really impressed me across a score or more of spins, but sort of fell out of my rotation for whatever reason as I was exploring a lot more throwbacks into the whole blackened speed/thrash style, which one might argue they were bordering on the periphery of, including the amazing Antichrist and their debut stunner Forbidden World. Its follow-up Violent Procreation was likewise pretty solid, but didn't seem to get much buzz, and I didn't listen to it quite as much as its predecessor. Forward to 2017, and now Entrench are on the same label as Antichrist (I Hate records), and still spitting out some of the more vitriolic, sincere, atmospheric stuff in this category.

It's hardly novel, it's not without  its flaws, but Through the Walls of Flesh is very enjoyable, hearkening back to that European proto-thrash that developed in both response and accordance with the West Coast US emergence of Slayer and Possessed. We're not talking a shallow knockoff of Pleasure to Kill or Sentence of Death here. There is a degree of that, but Entrench do a damn good job of giving it a fulfilling treatment so that it's something you might not IGNORE in lieu of its influences, but actually want to experience alongside them. Barbaric, fast paced tremolo picking is the go-to, but they keep these rhythm guitars interesting enough, bloodied and fresh even when the style itself seems highly redundant to a hundred tracks you've already heard. Fredrick Pellbrink also has this really caustic, nihilistic bark to him that works extremely well as it navigators the dirtnap inducing speed and volatile instrumentation, like an evil Swedish Razor. He's like an unholy amalgamation of Ron Rineheart (Dark Angel), Ron Royce (Coroner) and Tom Araya, and without him the music might lose some of its sense of immediacy and anger, which is impressive since he's also the guitarist...

I also like the little touches of proto-death metal that rear their primal, ugly heads here in tunes like "Enter the Fray" or "Iron Coffin", channeling a little of the early Death circa "Pull the Plug". The drums are just a raging force throughout the record, driving and blasting with ample thunder, while the bass guitar peals along pretty well so you can hear it right along the rhythm tracks. There's a whole lot of hellish 'hustle' when the pacing picks up, like you're being trampled by a herd of abyssal bulls being driven away from their demonic wranglers, for fear of their damned afterlives. Lots of flavorful, evil little licks here that will thrill fans of Antichrist or Deathhammer, and the leads are well-structured to complement the rhythm guitar riffs while adding just the proper level of escape and atmosphere that elevate the music into a total package. I'm not saying that everything here is equally memorable, but Entrench is another band who seem like they're really on the level, cognizant of where they come from, and translating their influences into something that is still vile, resonant and worthwhile even in 2017, rather than the vapid indistinct pizza thrashing of lesser scum. Good stuff here; I think Inevitable Decay remains my favorite, but this one certainly lives up to its legacy.