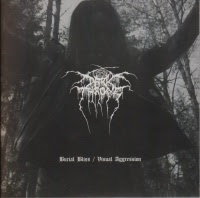 This 7" should prove a tempting little collector's item for those interested in it's B-side in particular, a cover of Celtic Frost's "Visual Aggression" which was recorded with the former Darkthrone members Dag Nilsen and Ivar Enger, before the band was rendered down to the two-piece formation we've so come to know and love. To my knowledge I don't think this has been released on anything before, not as a bonus track on any of the full-lengths, not even on the myriad of compilations, worthless or worthwhile, that the band's labels have ground out through the years. It's paired up here with a mildly rawer take on "Burial Bliss", a track from their latest full-length Arctic Thunder, which I have surprisingly not yet reviewed, though that will be remedied soon.

So I'll cover this in reverse..."Visual Aggression" is a rough track, but far more potent than you'd expect from the era in which it was released, more formidable than your average lost rehearsal track or cutting floor demo, and probably wouldn't have been out of place on their death metal-oriented debut Soulside Journey. Now, it's no secret that Hellhammer and early Celtic Frost were a huge influence upon the Norwegians, both their formative death metal era and A Blaze in the Northern Sky, which could be described as a frostbitten Hellhammer taken to extremes, so to that extent this version of it is played almost too closely to the original, with the only mild disparity coming through the vocals and the bulkier mix of the guitars; but it's a nifty little piece of history regardless of whether one is going to listen to it much with the original available, and nearly any of Darkthrone's more interesting and awesome original tunes.

As for "Burial Bliss", I have to admit that it's possible this is my preferred mix for the song, a pure barbaric mid-paced crusher which is aesthetically flush with "Visual Aggression", just a little more bloody and rough-edged than the one they settled on for the full-length. It's not an amazing piece in of itself, but travels at a workmanlike pace that likely pleased a lot of fans of the old Panzerfaust or Total Death era Darkthrone, grim as fuck with no surprise twists anywhere in its five minutes. In terms of being consistent, it's actually one of the better songs they could muster to partner up with the cover, so as a result the 7" makes a lot of sense. That said, it's really not worth much if you're not in the market to collect...the cover doesn't justify itself beyond pure tribute, and the original, while a little harsher than on Arctic Thunder, is also not unique enough to go out of your way for. But if you collect everything they release, and yearn for those old, primitive days, it's borderline satisfactory.