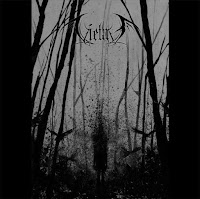 I've really dug the rural minimalism used on the Vietah covers, and this one, Czornaja ćviĺ ("Black Mold"), might be the strongest of all, with its central figure disintegrating into the titular substance between the graying sky and bleak vegetation surrounding it. I think it truly captures the earnest sadness on exhibition throughout the music, and provides a window into proper melancholic escapism, which is precisely why I turn towards a record like this. It's a little hard to make such a dreary appearance appealing, but I feel this is a case where that works well. As for the rest of the album, it doesn't quite deviate much from its predecessor, but does so with a few key ingredients that actually worked out in its favor.

The structure here is laid out a lot like the previous album, with four lengthy tracks, immediately throwing up the red flags that it's going to be an uphill battle to succeed. The sound is a fairly stock atmospheric black metal, with slower, drawn own chord patterns that speak more of fell majesty and lost longing than they hell and viciousness and savagery, and this has been a hallmark of Vietah for years. Black metal for wanderers. Hermits. Erudites. You don't come here for 666 posturing and photo bombing horns over your friends' heads on social media...this is for psychic sponges that soak up the decay around them and channel it into diabolic grandeur. Antarctis takes his damn time with you and draws you slowly into each invocation, and this time out he does so with a rawer sheen on the guitars than the clarity of the last, an improvement that I acknowledge, even though I wouldn't say that the actual riff quality is far above its predecessor. It's simply a more potent, primeval feel here without sacrificing the other instruments.

Speaking of which, there are more light flourishes of keys here than on the third record, and in mid 90s Burzum way, or Lifelover on Konkurs; they help to add a strange sense of grace to the slogging epic-Bathory pace of the 10+ minute cuts. In fact, Czornaja ćviĺ attains a lot more atmosphere all around. The drums splash a little harder, which fits this rhythm guitar tone better, and the whole mix seems more resonant and resilient, like its crashing off the sides of valleys and peaks before arriving in your ears. The snarled vocals, although still very sparse and minimal, also seem more fluid with their surroundings. The record does have a tendency to focus on very slow, churning, roiling riff patterns, with some of the higher strings struck for ambiance over the chords, and also a little more of that primeval Hellhammer of their older material returns with some of the straight chugged sections. Overall, though, I think it rewards this patience more than on Tajemstvy noczy. Not enough to really justify the longer compositions, but we at least end up with a slightly superior, solid and dependable experience through the murk and fog and depression.