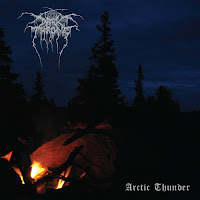 I've gotten at least a half dozen queries over the last nine months as to why I hadn't reviewed Darkthrone's Arctic Thunder, as I've always been so adamant on covering the rest of the Norwegians' output in the past. The answer to that is I just haven't wanted to admit to myself, or in any kind of official capacity to the public, that one of my favorite bands in the world, who I've consistently lauded for decades, from the traditional sound they are best known for, to the constant subgenre-hopping of their more recent work, had finally released a record...that, well...I didn't really like. Now, previous to this, I would have touted their prior full-length The Underground Resistance as my least favorite of their studio efforts, but at least with that one, I can say I love half the songs entirely, and the other half just had a few flaws which marred them. Arctic Thunder, on the other hand, doesn't inspire me in the slightest...and it's taken me this long to really hash out why, to go back and give it those many chances to prove itself, to find out what I'd been 'missing', which is something rare in my listening. Oh, it happens, just not terribly often.

Now, let me qualify that this is by no means a trainwreck of an album, and it possesses most of the hallmarks of what we come to expect from their sound. Simplistic songwriting, with 4-5 minute long songs, only a few riffs in each. Slightly more introspective interesting lyrics than you'd be expecting from your garden variety trad black metal, though nowhere near the band's most poignant, strange or whimsical. The production, while clean, is kept fairly raw, with the trashy but effective driving rock drums, the sincere but sinister guitar tones, and Nocturno Culto's unmistakable, potent rasping bark that is as fit as you've ever heard it, whether in short syllabic bursts or the more sustained growls that drift over the primacy of the riffing. Style-wise, we're no longer hearing some exploration into a new segment of traditional metal. No novelty speed, punk, thrash, doom, heavy metal, with the exception of how those niches' already intersect instrumentally or thematically, or how they've already appeared in the band's canon (the title track being a great example of this, with a heavy/black metal feel). This seems most intensively like a retrospective of the black and death roots the band was tugging at back in the early 90s, both as a warmup for their debut Soulside Journey and the raw, rustic black of their first few forays into that genre, then CHANNELED into the newer styles. The very narrow and minimalist range of chord progressions is highly reminiscent of stuff like Hellhammer, which so informed their earlier songwriting.

It looks inviting, with the dark woodland and sky, the fire crackling away, the logo displayed much as it was on Total Death, which once stood out for having the color artwork rather than the newsprint grimness. But this Arctic feels like it's populated by only the driest ice, the songs seem put together in the safest and least adventurous ways possible. It's not the first time I might have described one of their albums that way, mind you, but there was a particular darkness, novelty, and menace to older discs like Panzerfaust or Ravishing Grimness which immortalized them to my brain. Here, it seems like a couple of guys sitting around a campfire, dredging up memories of cutting room floor tunes that were a little too dull to incorporate on prior full-lengths, and then deciding to assemble them into one retrospective of work. All the pieces are functional, operate fluidly through the course of the disc, but just never manifest into truly worthwhile tracks. I often felt a little 'faked out', too, like in the tune "Throw Me Through the Marshes" where you get that cool, simple groove of the verse, but then it just never seemed as if it was capitalized on...the song doesn't effectively escalate beyond that point.

I probably liked the style on "Arctic Thunder" and "The Wyoming Distance" the most, if mainly because I liked how that blackened epic heavy metal chugging bore the bulk of NC's vocals, giving it the sickest, coolest contrast, but even there it seemed like the bridge sections needed something more to them to make them more compelling. Most of the eight tracks seem like earnest attempts at 'one hook' wonders, but those solitary hooks are simply not memorable enough themselves to unlock that achievement. To me, it really did feel like these were all just sort of assembled from scraps of ideas that weren't strong enough to appear elsewhere, and rather than 40 minutes of killer, we get about 30 minutes of filler surrounding the few passable guitars, and the solid vocal performance. Granted, this is still Darkthrone, and that half-hour of median material is something I'd probably listen to over a whole range of other, lesser bands.

Again, this is no disaster. No Diabolicus in Musica. No Load. No Risk. I wouldn't describe it as weak or, even painfully average, but after a dozen attempts to go back and re-invest myself, I can't deny that it's my least favorite of their full-lengths, and unlikely to get a lot of playtime here even compared to Underground Resistance, Plaguewielder, or Goatlord, the albums I would have previously considered on the lower rungs of their studio catalog, which only goes to enforce how summarily smitten I am with the band, because I dig all of those. Arctic Thunder is probably just a fluke for me, a one-off, a record whose specifics just didn't gel with the entertainment center of my brain. Here's hoping...