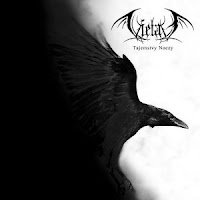 Tajemstvy noczy ('Sacraments of Night') is the third Vietah full-length seeing a vinyl reissue through I Hate records of Sweden, and it continues the Belarusian's solidification into a professional and consistent one-man black metal force, without adding any sort of dramatic mutations or progressions to the style he honed over the earlier albums. Surely, this is the crispest, cleanest of recordings he had released to its point, with a great rhythm guitar mix, audible if subversive bass lines that cling loyally to the procession of chords, and a more subtle but effective use of drums which don't seek to supplant the melodies with brutality, but to remain a driving background element to support them, thus allowing for a more hypnotic, rustic sense to the repetition rather than a thundering blast furnace you expect out of a lot of traditional North European black metal.

Vietah is no stranger to longer tracks, with a handful populating the previous releases, but for this record it's the rule and not the exception...four tunes, 41 minutes, each ranging from 9-12 minutes individually. Now, I've gone over this many times before, that bloating up a song structure is by no means any sort of guarantee for success, and I'll say up front that Tajemstvy noczy suffers a little from this, since the riff composition isn't always so fresh or inventive that it sticks to you, and there are not nearly enough dynamics happening within the bounds of each of these behemoths, nor any sort of meandering randomness, epic ascension/descension, or any other distraction. They remain all too consistent in pacing and in being purely riff-driven works that exist on a dry, level plane, without creating a lot of tension or emotional impact. That's not to say they're all scrap-worthy, since a lot of the guitar patterns are of the caliber you might have expected on an earlier 21st century Satyricon disc, but there's no real escalation here, or any surprise lurking anywhere.

But that's not in itself a massive flaw, since there are points where the album really does work, in particular the closer "Kałyhanka dlja njabožczyka", which is no more complex than the other tunes, but has a much warmer, more addictive flavor to the melodies that most effectively captured the melancholic intentions of the material, and didn't seem to have any sort of lull in my enjoyment. I do feel that Antarctis could work a little more on the range and rasp of his vocals, here they are sparse and workmanlike, not unlike Satyr but less venomous or vibrant; but the songs might be better suited to a protracted sort of scream, or echoed effects that create a greater sense of urgency, suffering or poignancy. As it stands, everything is a little safe and dependable, and that's ultimately the reason I didn't feel like this one was as cold and affecting as its predecessor Smalisty žah. Still, it's a solid effort, and if Vietah can dial up its atmosphere, take a whetstone to its guitar lines, and maintain this level of production, then the next level could really be attained.