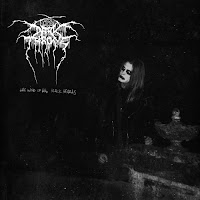 Do you long for those old tapes of yourself jamming in the garage or basement and laying it all down with a cassette or perhaps even a poorly-implemented 4-track recorder? Are you such a purist that only the rehearsals will do, that every band has officially sold out after its first demo or album? Do you like to hear the roots of black metal with none of the frills, none of the polish, none of the studio wizardry it took to pull off some of the genre's most successful records? The Wind of 666 Black Hearts has a lot of this in mind, and Peaceville Records is banking that enough of you will find at least a collector's item out of these Darkthrone rehearsals over two 12" records, priced reasonably enough as far as these bound-to-be collectibles are vomited out onto the market.

This is the majority of A Blaze in the Northern Sky and Under a Funeral Moon, or at least 10 of their 14 tracks, but in a cruder rehearsal form that lacks some of the frostbitten force you will have come to know from the studio incarnations. Raw, Hellhammer-spawned guitar lines moving at a moderate clip, back when that was their thing, back when they had switched out of death metal mode into a style that was quite new and fresh for the time, the same style that they would become royalty for over the ensuing decades. The guitars lack some of the coldness of the LPs, and the drums are even more tinny and crashy and amateurish, the vocals a paint-peeling rasp that appear less than you'll expect them to. Leads are an unwholesome mess. I did like that you could hear the bass, it gives the jamming a nice low end anchor and some contrast with the rawer rhythm tones, but on the whole I'd say that, at much as I love these songs on the albums, they seem a little less potent and atmospheric in this format, and I say that even as someone who is constantly dragging out such old demos and gladly ignoring their flaws in the name of nostalgia.

Only collectors and purists need apply here, especially if you want to hear the band with the lineup that included Dag and Zephyrous. This isn't just some dumpy compilation of pre-released album tracks being plucked at random and sold back to you, I'll grant it that, so there is some nostalgia in that it shows the band in the buff, at its most 'vulnerable'...as if these corpse-painted Scandinavian deviants could give a fuck about vulnerability. That said, I can think of no honest reason why I'd ever spin this over the 15+ good to great to perfect Darkthrone discs I've already got in my collection, all of which benefit from a better production and atmosphere. This is just such a sincere, raw band to begin with that an even more primal package like The Wind of 666 Black Hearts can't do it much justice, the songs lack that haunting and impressively defiant feel that I experienced when listening to them back in the dawn of the 90s, and it offers little more than history.