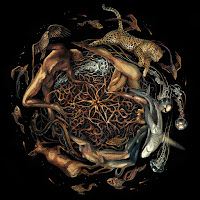 There are few real instances of originality left in metal music, to the extent that even when you hear that band that sounds 'original', you can attribute that to an unconscious smattering of influences from half a dozen other weirdo bands that you knew from a decade ago. To a degree, I could say that about Finland's Selcouth, the eclectic construct of several members of another band called Khanus (who put out a pretty nifty EP last year called Rites of Fire, which I have also reviewed on these pages). Sure, if you're familiar with the Norse post-black metal/progressive outlets like Arcturus, Virus, Ulver, and especially Solefald, there will be a few aesthetics carried forward, and yet even beyond that I would say there is plenty about Heart is the Star of Chaos that feels strikingly unique within the envelope of bizarro left-of-center metal hybridization into which this debut will be signed, sealed and delivered.

Imagine if you will a bevy of grooving bass lines, distorted or smooth, jazzy lounge-lizard pianos and nuances, carefully threaded and mute-picked electric guitars, and a percussionist who can seamlessly cultivate all these various strains into a cohesive, tribal, rhythmic whole. Now atop this sundae of sonic eccentricity, place a vocalist who is both burly and fragile, clear and crackling, expressive and emotive and oftentimes hypnotic, like an unconscious amalgamation of Czral and David Bowie, but don't stop there...harmonize him with all manner of breathy intonations, add in an equally intriguing female singer who has a nice, modern acid jazzy nightclub vibe about her but can curve all that into a snarl when the talons come out, slightly reminiscent of Monika from the underrated Atrox. Mix the results so that no two songs quite sound alike, but all of them weave together like dyes onto a lucid canvas upon which dreamy, haze-like states are being translated directly from musical brain patterns into actual, audible sounds. I know of no real other way to accurately describe this Selcouth record, it's essentially an reverse explosion of shattered fragments back into an introspective mirror, a chaos made congenial by its weavers' ability to reign it all into a drugged warmth.

and it's all about the details haunting almost every moment of the recording. Those frenetic little guitar licks driving the 'verses' of "Querencia", or the pluggy, bemused but strangely threatening bass-lines crawling and scaling along beneath the lush keys and strings "Of Hopes and Lost Treasures". Or even when the band lets its 'extreme metal' (ooooo) roots through in "Below Hope" and then STILL manages to weird them out to oblivion and back. I can't say that every single lick or vocal line is equally poignant or impressive, but considering what a wide span of influences they bring forth, from the old and cheesy operatic Gothic auras to the nuanced, almost improvisational jazz beats and textures, this debut is nothing less than a monster of creativity, a Frankenstein of mind-fucking experiments in rock, rampaging across its cosmos, yet never so out-of-control that the mad scientists which created it lose their leash on the lightning that gave it life. Certifiable, and certifiably cool at the same time.