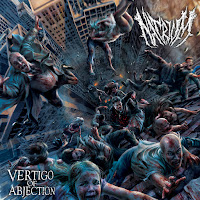 This is only my first exposure to Italy's Natrium, but they strike me as the sort of medium weight brutal death which more accurately reflects where the sub-genre was headed in the late 90s or earlier 21st century, rather than where it's all ended up now with its clinical wank fests, mechanical deathcore breakdowns, etc. To be more specific, I was feeling some heavy influence from Suffocation and Cannibal Corpse, almost a median between Pierced from Within and Gore Obsessed, with a lot of faster barrages reminiscent of the heavier Floridian hitters, and an exercise in technicality that never sounds like it's simply being flashy or overly indulgent, just a group of guys that know how to play, know how to play hard, and will show you their chops when the writing warrants it.

Don't get me wrong, you can tell by the frenetic picking patterns implicit in tracks like "Vertigo of Abjection" itself that they're capable of some complexity, and they definitely have a lot of stop/start elements and clamorous riffing and percussion patterns that slightly break the formula of their influences, but you're not going to find cheap knuckle-dragging chug-offs, flamboyant and empty arpeggios flitting everywhere, or any cheap tricks whatsoever...this record is about as straightforward a beating as you're like to receive in its style, all punishment going straight through the punctuality and punch of the palm muted guitars, the truly intense dexterity of the drummer, and the deep and functional growls which reminds me quite a lot of Corpsegrinder's lower grunts in how he spits out syllables, as well as Frank Mullen's guttural depth and breadth. Bass is present at some moments more than others, especially when they go for a poppier, funky tone that stands out the most. I also noticed a little more of an interesting dissonance in the rhythm guitars than usual, not so much that it's in the majority of riffs, but enough to keep it a fraction more compelling.

The drawbacks here are few. Sometimes the vocals get monotonous. The riffs, while choppy, busy and varied enough across the eight tracks to keep you from getting bored, are rarely the sort that feel truly evil or threatening, more just a hyperactive, muscular flexing. The only atmosphere here is that of repeatedly taking a piledriver to your cranium, so you're dependent heavily on the tempos at which the guitars are pummeling along, or the busywork behind the kit which almost had my head spinning off, or the sample of Ripley from Alien Resurrection, which you'll find nestled deep at the end of "Inhuman Commodification". It's a truly blue collar, practical sort of brutal death which might lack some of the spastic, relentless, noodling ambition of a Brain Drill, or the jazzy cosmic escapism of a Decrepit Birth, but should pass muster if you've got a lot of fondness for bands like Severe Torture, Gorgasm, Deeds of Flesh, Prostitute Disfigurement, Horde Casket, and so on. Effective if not exemplary, Vertigo could certainly have gained from more leads or dissonant, higher pitched guitars, and some other means to create a creepier atmosphere, with more surprises waiting in ambush, but it's competent enough in terms of sheer concussive capacity.