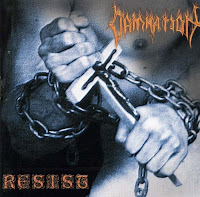 By the later 90s, death metal had been inundated with so many more accessible traits via heavy and thrash metal that it might have made a lot of sense for an underground group like Damnation to boost their signal, but to their credit the only thing they really cleaned up here at all was arguably the production values. More than any of their albums prior, Resist feels like a gestalt of the Floridian extreme death that went into the band's older albums, primarily of the Morbid Angel or Malevolent Creation variety, with a few Deicide rhythms, but it also maintains that mild sense of atmosphere and experimentation they had used before with the admission of a few scant ambient/instrumental passages to flesh out the faster, harsher fundamentals employed.

The record is essentially a lot of jerky, tremolo picked rhythms with a lot of stop/start patterns that are capitalized on by the drumming, which is likely the most intense and audible across their career. The vocals follow the David Vincent style of intonation, harsh and guttural, nihilistic barks, but with the advantage of being a good decade later than our inauguration to that style, so they're a little more muscular in nature, though the patterns are often quite as sloppy, vaguely following the rhythmic patterns beneath them, giving their implementation a little more of an unhinged, asylum aesthetic which actually suits the music well. Never before have I heard the Damnation guitars this clearly, and while the wealth of the progressions they write are nothing terribly nuanced or special, they really dig into those strings here, with some of their most involved and rapid fire patterns, not to mention some of the best, wild lead lines they'd used to this point. The bass guitar also keeps a pretty solid presence in the mix, though it does get buried beneath the snare, fills, vocals and rhythm guitar whenever they are all firing off together into one of the more intense sequences.

Resist does lack some of the suffocating atmosphere of the sophomore Rebel Souls, and I also feel it comes up slightly short of that album in overall memorability, but note for note they are pretty close, with this, the band's swan song depicting their most intricate guitar work with a carnal clarity. The riffs do possess a variety I had not heard before, with a little bit of a clinical thrash element there in the intro to "Absence in Humanity", and some other tracks which reach slightly outside the comfort zone. Dark, ambient passages like "Voices of an Unknown Dimension" help lend a sense of evil and gravity to the track list, though the electronic and sounds used seem a little claptrap and cheesy, and most of them are embedded into the metal tracks without much of a strong purpose. The simple fact of the matter is that Damnation were a band reaching for something, and while they arguably got there in the 90s, they had more to their material than the already dulling proto brutal death and gore being pimped; a fusion of old school aesthetics with a slight regional spin. No, they weren't writing on the level of Vader or Behemoth or other countrymen, and it makes some sense that they got lost in the shuffle, but overall they had a good run as a solid second tier act which can still evoke a little darkness if you listen to them in the proper mindset. Rebel Souls and Resist were a pretty convincing one-two punch combo for such an unknown.