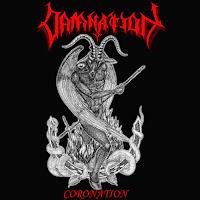 Keeping themselves busy through the latter half of the 90s, Poland's Damnation capitalized on their very solid sophomore Rebel Souls with a four-track EP that sounds a lot like it looks, which is to say that it's blasphemous, savage occult death metal with a Baphomet cover image nearly indistinguishable from many others in its class. That's not to pass judgement too heavily on the music, but it does not seem that the band was aesthetically interested at the moment on building up further momentum from the prior album, which had shown a good degree of growth from their 1995 debut. I suppose I can give it a pass here, but only because they saw fit to record a tune called "Spell Master", and because the material itself does exhibit the ferocity and fortitude of Rebel Souls.

The mix is set at about the same level of epic murk as its predecessor, with the roiling guitars that just seethe along beneath the broader, guttural growls that crown the experience. The drums are tinny and on the lower side of the audibility range here, but it comes together like decent underground Euro death from its day and age, and one can't expect so much more. As for the riff structures, they are generally fast-paced and give off a similar Morbid Angel vibe that they'd done on the full-lengths, only some of the chord progressions used on these tunes most remind me of the Altars of Madness era, which happens to be my favorite from Trey and company. Atmospherics are still used with some sparse use of organ-like synth tones ("Spell Master") or a turbulent ambiance (intro to the title cut), so in that way they keep in line with their vision on the earlier records, and I also found that the lead work and melodic accompaniment here was kept at just the right ratio to keep the material from growing dull, because honestly not a lot of these riffs are that amazing to begin with.

The compositions do feel a fraction cluttered, especially (and sadly) on "Spell Master", but I feel that there's enough going on through the tracks, enough of a vibrant, hellish energy that it doesn't mar the quality terribly. Also, there's a big contrast between the business of the guitars and the vocals, which are almost all delivered with those broader phrasings. The bass tone has a good distortion on it but still seems to bury itself once the writhing guitars are on full thrust, and ultimately I think this EP exhibits the consistency of Rebel Souls, while slightly suffering from the clamor of Reborn... I also can't say I'd listen to it over either of those albums, but like the debut it does a moderate job of putting you into that 90s headspace, before production values were heavily polished and when death metal still maintained a natural, evil vibe to it that wasn't nostalgia-borne, but carried the genuine, black pulse of that formative age. Damnation is no Vader, but they'll do in a pinch if you want to dance on tombstones while you're sloshing your brain with vodka.