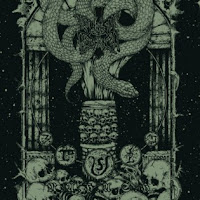 These Frenchmen are one of those unfortunate bands who have chosen a name that, within the proper cultural context, actually sounds pretty cool, but OUTSIDE of that, for us ignorant English speakers, actually sounds quite funny, like a discount clothing outfitter. Having said that, there is nothing quite so comical about what Hats Barn are playing on this fifth full-length album, a strain of straightforward, orthodox black metal which hearkens directly back to the genre's emergence in the 90s and doesn't even border or attempting to broaden or refine those parameters whatsoever. This is both a positive and negative, because while these guys do attain a sense of cult hostility through the production and rasped vocals, the riff set is just not that interesting...

We've heard these streams of chords, with only slight gradations, tens of thousands of times at this point and the material on N.A.H.A.S.H. does little but entertain the most predictable patterns, even if they are delivered with a genuine frenzy and ferocity that might still please some diehards who have just mentally never left that space for fear of abandoning its purism. I don't personally have an issue with the most primal and conventional black metal, provided its simpler note progressions clench on to a sense of timeless cruelty, a harsh catchiness which betrays the ages, but here I just felt like the selections were so lacking, affixed to the clamorous, often clumsy beatings of the drums which felt like a soulless charge for 50% of the record. Don't mistake me, this is one unrelenting duo and they don't perform at a level far below most of their peers, and once in awhile the chords become a flood of jarring aggression that makes its point despite its crudeness, but apart from the occasional segue into something more atmospheric and vague, like the cleaner guitar in "Fallen Angels from the Sky", it's altogether too obsessed with setting and sticking to its Satanic status quo.

I'm not in love with the production here, either, which sounds fine for the rhythm guitar and the vocal but doesn't score many points elsewhere. The drums have a very forward, crashy, thudding jam room feel to them which isn't necessarily a bad thing, but betrays the potential atmosphere they might lend the rhythm guitars if they had been more distant and echoing. Bass guitar is buried somewhere in this, but it's just never creating any interesting lines, and is suborning to the guitars and adding little other than ballast. Most will find the mix here more up front and approachable than on prior albums like Primitive Humans Desecration or A Necessary Dehumanization, and surely this has a more robust, less dry feel to it, but I think I rather preferred the more level, cold and sinister feel on their 2012 effort Voices of the Ultimate Possession. Ultimately, where my tastes in French black metal tend more towards the esoteric and outside thinking bands like Peste Noire, DSO, Blut Aus Nord and Merrimack, I didn't get much from this, but it's not a bad record if you're seeking a stock, savage 1992-1996 black metal sound with little nuance or nonsense.