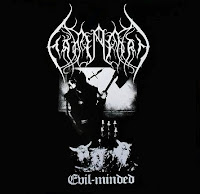 Sir N. is a rather prolific figure buried in the Swedish black metal underground, who might be recognized by some for other projects like Grav, Svartrit and Grifteskymfning, but in general seems to be settled into an interesting niche in which a traditional old school songwriting style is affixed with a fraction more atmosphere than you might be accustomed to by all your garden variety Mayhem, Hellhammer and Darkthrone adherents. This manifests quite prominently even on this earlier compilation, Evil-Minded, which collects materials from the first few years of Hädanfärd's activity, well before he would release the debut Smutsiga sinnen and its several subsequent EP recordings.

Now, where a lot of demo or rehearsal or 'early days' style collections get by on little more than the novelty of hearing a band's roughshod roots, Evil-Minded is actually quite consistent and possibly even worthy of being considered a debut album in of itself, at least in terms of the material. The production values seem to bounce around between the metal cuts and the more ambient pieces, on both ends of the album, but I think despite this tonal disparity the tracks work in lockstep and present an appropriately mournful, dismal sound which lives up to the translation of the band name, which would be either 'departed' or 'passing from life'. Sir N. excels in crafting very simplistic peaks and valleys of driving, primal, grooving black metal via some of the bands I mentioned above, and these ominous or melancholic instrumental segues which focus a lot on haunted synth tones plus a little bit of percussion and guitar (listen to the close of "Vanhelga ljustes gestalt" to hear a good example).

Rather than an impish rasp, he uses a broader, more tortured growl which adds a weight of suffering to some lighter, more melodic elements in the chords ("Ohelighetens helgonbild"). In addition, while the percussion here is very tinny, it's satisfying, and his bass lines are just thick enough to matter rather than get drowned out by the rawness of the mix. There's also a tendency towards these hazy, shimmering guitar passages which fit snugly into the mold of blackgaze, or post-black metal, as if Hädanfärd was dipping its toes into that style but grounding it in the Scandinavian conventions of the black metal medium. It makes for a listening experience that holds its value through 35 minutes, with almost all the tracks held down to 3-4 minute experiences which don't overstay their welcome. The one issue I had is that some of them seem to cut out or end too abruptly, not necessarily by mistake, but also not in a very satisfying way. Ultimately, though, like a number of Sir N.'s works over various bands, this is a relatively immersive and underappreciated album which will appeal to those who use the genre for introspection and soul-searching more than emotional church-burning.