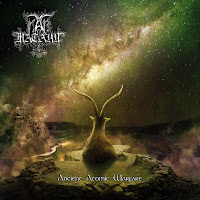 Whilst I wasn't entirely sold on this Chilean band's 2012 debut Enuma Elish, I could at least recognize that Nat Mattaru had a genuine take on antiquated death metal which wasn't solely drawn from any one classic band's wake; more a hybrid of the New York, Floridian and European sounds. With Ancient Atomic Warfare, their sophomore, they don't exactly cross any boundaries to explore new visions, but they've slightly ramped up the songwriting so it seems a little less banal, and with such a thick, viscous production as you'll find here, it does at the very least sound more pungently evil and alien like its forebears from the 90s.

Ironically, I felt like the tone and structure of the riffs here was a little more directly in the vicinity of Incantation, with brief flourishes of Immolation and Morbid Angel. Slower, creeping rhythms are interspersed with frenzies of fleshy, roiling mausoleum tremolo picked guitars that hearken back to an Onward to Golgotha. Driving tempos give way to slower, ritualistic death/doom sequences joined with a more tribal drumming element. The entirely of the record is cast in a really deep, bass-like hue which gives it the impression some sprawling ancient evil is shaking its belly at the listener in jest of his or her eternal consumption. The drums thunder constantly, the toms being the loudest individual component with a dissonant cymbal crash and unending brickwork being trodden by the feet. There's a certain Eastern flavor to some of the riffing which lends it a mystique not unlike a band like Nile or Melechech, only slowed down to a molasses-like aberration that crawled along until struck by its own sugar highs that resulted in spurious, busier riff patterns, melodies and percussive clamor.

The vocalist bounces back and forth between two roaring pitches: guttural and deeper guttural, and this definitely contributes to the ancient repulsion of the recording. Even the occasional whispered line is dense and meaty, so you feel like some ugly priest is reading glyphs by torchlight from the walls of some musty, forgotten tomb. The riffs don't offer much intricacy, they're often just base line patterns of chords with no surprises, or fat slices of tremolo picked morbidity which seem to retain echoes of the dread and nausea that their influences once mastered. Where Ancient Atomic Warfare works for me above its predecessor is just in simple immersion, the songs wedged my psyched further into subterranean nostalgia and stirred through the guts like a sludgy black coffee. Fans of Disma, Cruciamentum, and Funebrarum might want to take this along on their next ride through some damp caverns or to the cosmic emptiness beyond.