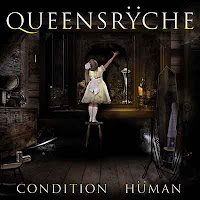 And now for some good news: I haven't liked a Queensrÿche album as much as Condition Hüman since they release Promised Land in 1994, which itself was probably the sole exception to the middling legacy they left behind in those times. Actually, strike that, because this is superior to even that. Whatever moons and planets in the universe required alignment have come together and shined fortune upon these gentlemen, and they've written the record that I really wished the eponymous 2013 title had been, with some aural pleasure to spare. Not only does it sound like the proper 21st century Queensrÿche so many of us have likely awaited, but it plays like new life for the band. Perhaps even breathing new life into a niche genre that so many have likely written off by now as nerdy detritus for musical theory students of a bygone era. And in the process, sandblasting Geoff Tate's Operation: Mindcrime debut as if it were a soup cracker.

Let me clarify...this is not EXACTLY the Queensrÿche of old, at least not in terms of how the music itself is structured. There are traces of that, with a more muscular sculpt to the guitars and a recognition of the groove and hard rock influences which informed much of their material over the last few decades. Todd La Torre maintains his best Geoff Tate impersonation while simultaneously shoveling in his own higher range by the truckload. In fact, he's the shining beacon of this affair, with a number of memorable chorus hooks that rival the best that bands like Fates Warning, Ivanhoe, Angra and their peers have produced in a very long time. The music is a hybrid of their 80s style and a few more modernized, groovy prog metal elements that characterize the verse hooks in cuts like "Guardian" and "Toxic Remedy". Atmospheric dual harmonies and gleaming leads are cautiously applied where they are most useful, and there are even moody moments prog metal moments in cuts like "Arrow of Time" which hearken back to stuff like Fates Warning's Perfect Symmetry. But holding it all together is La Torre's propensity to just soar across the skyline of the rhythm guitar and capture the ear every time.

Scott Rockenfield might not seem the most technical drummer by today's standards, but he charges what might otherwise be some standard hard rock riffing with a lot of genuine momentum and energy that strips away the listener's immunity. Love his fills here even if they're nothing new, and I'd say his performance plays second fiddle only to La Torre, as much as I like the guitars. The bass lines were probably never the forte of the band, yet Jackson's tone here is just perfect for placing such a simple low end to the busier melodies constantly frothing off the imaginations of Wilton and Lundgren. But what's even more impressive is just how damn well paced this album is...it remains fairly weighted throughout, if not with the meat of the riffs than with the emotional impact of choruses in slower, more measured tunes like "Selfish Lives" and the beautiful "Bulletproof". No cheesy or weak ballads, included, even the record's softest cut "Just Us" is firm and memorable. Production is pristine, even elegant. Musicianship restrained to peak effectiveness. A few rungs below perfection, perhaps, but this is just such a joy to listen through, and for a good number of spins it was improving with each successive exposure. Pure class, and with this record, they can finally take back their seats near the head. Hell, they could teach it.