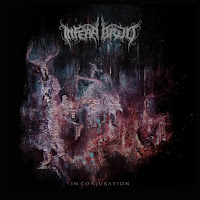 One of the hazards of a band peaking so early in their career is that you'll be blown away by the debut or sophomore and then struggle to find that same connection on subsequent records. Massachusetts' Infera Bruo, who put out a really astonishing s/t debut demo, and then a great full-length followup in Desolate Unknown, largely manage to avoid that pitfall by offering a slab of more matured and consistent sounding material. This is at once a more evil sounding effort in spots, with some spacious and cavernous sequences that contrast against the blasting surge, and a seasoned songwriting exhibition in which a band fully capable of flying off the handle exercise quite a lot of restraint and balance between the interlocking instruments and the pacing of various tracks.

The mid range clean vocals that helped round out the previous album are returned here, with arguably even more personality, even though they're still in the minority; if you're into the similar approach taken by bands like Enslaved, Arcturus and Borknagar, you're going to feel right at home since they so seamlessly switch lanes with the snarl, not feeling forced or intrusive. There's also an increased use of more jangly, interesting guitar passages which interspersed with the metric ton of traditional, melodic tremolo picking that dominates a huge chunk of the material. In Conjuration is replete with peaks and valleys of aggression, often steering away from its black metal busyness for simpler chord patterns that are splayed out and 'felt out' over more spacious percussion. These pace changes are timed well enough across the 47 minutes that it helps a lot to ground some of the longer tunes and give them a real sense of consistency rather than growing ennui that a lot of black metal bands can suffer from due to pretentious bloat. The bass and drums here are also the best mixed yet alongside the guitars, subdued enough to allow the riffs the razor edge they so often crave.

The raw speed and technicality of the rhythm guitars is about the same level as the influences, which for me really seemed to hover in that Norse camp like Immortal or Satyricon in their primes. An emphasis is not on pure catchiness so much as a cutting finesse and lots of interesting detail that the listener can discern with future spins of the disc. Again, I don't know if it's just the pure production capabilities of the underground these days via technology, but Infera Bruo sounds as confident and sophisticated, if not more so than many European bands with 20-25 years behind them. The choices in notation are not always obvious, and steer slightly further away from accessibility than either of the earlier works. Ironically, I came away from this slightly less blown away, but we're talking a mere sliver below Desolate Unknown, and I would still struggle to come up with a New England band in this style that I enjoy more right now; Vattnet Viskar has achieved more popularity, but I'm not a big fan...this is just so much more dynamic, vicious and memorable. Good on Bindrune for picking them up, they are building quite a roster. Can't recommend it enough, and it's all here: the chops, the intensity, the artistry. Attention paid, now paying forward. Check them out.