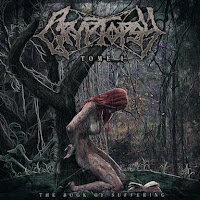 According the Indiegogo page that was set up The Tome of Suffering, it doesn't seem to have met it's funding goal, halted at just under 50% of the 20k the Canadians wanted to record and release this first EP (in a proposed trilogy) to the world. An interesting fact, since it seems to have come out anyway, but also because one of the most hallowed brutal death metal bands in existence did not quite impress its presumed audience enough with the details of this project to get it backed. Nevertheless, after the self-release of their eponymous apologetic full-length in 2012, righting the band's stylistic course from the unwelcome deathcore deviations of The Unspoken King, this four-tracker has in fact seen the light of day, and continues along the path of its predecessor to retain some barbaric legitimacy.

And it is an all-out assault on the senses, once the rather self-celebratory intro sample cedes to "Detritus (The One They Kept)", a blasting neck-strainer interspersed with all manner of choppy grooves to ensure maximum moshing reaction, and zipping, zagging rhythm guitar lines that help distract the ear from what is otherwise a fairly half-baked selection of chord progressions. Matt McGachy's barks, grunts and deeper gutturals might forever evade the distinction of the invertebrate before him, but he plasters the tracks with an overbearing balance that anchors the far thinner and technical timbre of the rhythm guitar, and the almost effortless strength with which Flo Mounier shifts the gears on his drum kit, bouncing and blasting with little strain over every hill, around every rotary, and hurtling over every pit stop. Coupled with the farting, bustling bass-lines of Olivier Pinard, the undertow of The Book of Suffering would seem a hectic framework upon which to paste riffs, but Christian Donaldson finds a way, his note choices rarely all that interesting, but wild and frenetic enough to not disservice the legacy of intensity that got Cryptopsy this far to begin with.

The pacing is largely out of control, a cork popping off the bottle for much of the 17 minute play length, pausing for breath only for the brief opening guitar experimentation of "The Knife, The Head and What Remains" or the ambient winding-down of "Halothane Glow". Granted, the release as a whole is short, and catering to the expectations of a mixed tech death/metalcore crowd which always valued the band for its position on the edge of the handle, flying off at various intervals, so the lack of much variation could be forgiven. Yet, for some reason, the four tracks on this just did not resonate with me anyway. The dexterity and the suffocating precision of the performance failed to muster individual riffs or lyrical lines that had me reeling for more, and in its quest for such a technically flawless, pinpoint production it almost entirely lacks staying power. As an statement of purpose, I think The Book of Suffering is quite loyal to the s/t, and the band are meting out the style of material which can keep them relevant in a niche that desperately needs a new destination. This newer lineup can play your lights out, there is no question, but I don't know that the band still leads the pack, or that they've ever done so in the nearly two decades since None So Vile.