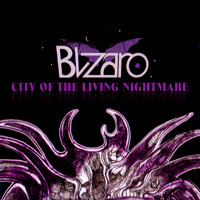 It's not uncommon for a band to specialize and excel in one area, but New York's Blizaro not only specializes in two, but wedges them up against one another in a union so strangely symmetrical that one wonders why they were ever separate? And if you think about it, they really weren't...Italian prog pioneers Goblin were always able to engage in either psychedelic grooves or harder rocking mayhem, and their countryman Paul Chain made a rather overlooked but extensive career out of taking Black Sabbath's doom metal foundation and then applying it to all manner of cinematic, atmospheric aesthetics cultivated from the 60s through the 80s, anything from Hammer Horror to the giallo to the more contemporary synthesizers used in fright films further West. Without sounding quite the same, Blizaro could be viewed as a successor to such hybridized traditions, and a damn fine one. They were also one of the more interesting acts to land at Razorback Recordings, a label long associated with cult and camp horror, but previously pigeonholed into the death and grind genres; having a band like Blizaro on the books was a chance to redefine that thematic relationship, to freshen up a roster which was sorta samey, if not exactly stagnant.

You'll notice immediately with the title track that this is perhaps not the most polished, professional production, but that this does not at all serve as any sort of detriment. More importantly, you'll hear that John Gallo's riffing is the polar opposite of lazy doom composition, a crutch that I readily admit I find with a lot of groups on the lower half of this niche. Melodic, inventive, never restricted to mere dime-a-dozen stoner rock chord progressions, he seems to season the material with influences from a broader spectrum of heavy/speed metal, progressive rock, and even the kitchen sink if it suits him. As a result, each of his recordings is a journey with a lot of left turns and no real discernible ending. Cuts like "Midnight Lurkers" and "Eyes in the Casket" directly channel the Cream, Iron Butterfly, and  Sabbath blues/metal tradition, while others take us on a further tour through the sub-genre's evolution through Pentagram, Cirith Ungol, Trouble and Candlemass. The mix is on the murkier end of clear, with down to earth rhythm guitar tones, porky bass lines and slowly grooving drums that create a live vibe to the process. The leads and melodies always soar well above the din, making for interesting prog sequences that stand aloft from the myriad synthesizers and choirs sounds that evoke a purple, psychedelic/Gothic Limbo...

And as much as I like the 'metal' aspect of the music, it's those very organs and synthesizers that really put this over the top for me, and even provide most of the record's most memorable moments, especially where they blend with Gallo's everyman, Osbourne-like croon. They range from very solemn and simple lines to orchestral elevations (as in the depths of "Mental Disease Overture") and simultaneously conjure up Carpenter, Tangerine Dream, and just about every horror score you've ever stayed up late at night with and become hypnotized by. This isn't complex, dissonant, or even highly experimental stuff, it just has a very hazy, theatrical vibe to it which makes you want to spin it over and over. The cover of Goblin's Suspiria theme is a nice touch, and while it seems an obvious choice, Blizaro screws with it just enough that it becomes more of a seamless component of City of the Living Nightmare itself rather than a superficial grab for credibility. At just over 60 minutes, this really wraps up into an experience I'd recommend to anyone who enjoys any comparison I've made throughout the review, and then I'd extend that to the Strange Doorways compilation (2013) or the John Gallow debut Violet Dreams (2014) which are this good and better. Vivid, morbid, flavorful, freaky, and fun. Third eyes open at all times.